Case series on acute HCV in HIV-negative men in regular clinical practice: a call for action 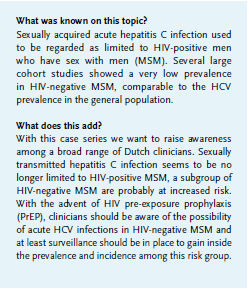 The World Health Organisation recently released targets for hepatitis B and hepatitis C (HCV) elimination by 2030. They included a 90% reduction in new infections and a 65% reduction in hepatitis-related mortality by 2030.1
One of the key populations at risk for HCV infection is HIV-infected men who have sex with men (MSM). Among HIV-infected individuals worldwide, it has been estimated that 2.4% are co-infected with HCV, yet this rises to 6.4% in HIV-infected MSM.2 Because HIV-infected MSM in Western Europe are receiving care for their HIV, treating all HIV-infected patients with an HCV co-infection for their HCV should be straightforward and HCV elimination in this specific subgroup might be possible.3,4 Previous epidemiological data suggested that transmission of HCV among MSM was largely limited to HIV-infected MSM.5-7 The evidence that HIV treatment as prevention (TasP) and HIV pre-exposure prophylaxis (PrEP) reduces the risk of HIV transmission is overwhelming.8-11 Although currently only four European countries have made PrEP available free of charge, generic tenofovir-disoproxil fumarate and emtricitabine in a single combination tablet will soon become available in certain European countries.12 In Germany as well as the Netherlands negotiations have resulted in a substantial price reduction and will make PrEP affordable for many MSM. Without any doubt, PrEP and TasP will prevent many new HIV infections in MSM. However, it can be expected that PrEP and TasP will also lead to increased sexual mixing between HIV positive and negative MSM. As such, sexually transmitted infections (STIs) such as HCV that were thought to be limited to HIV-infected MSM are likely to become more frequent in HIV-uninfected MSM as well. A recent modelling study seems to confirm this and showed that sexual behaviour patterns are likely to drive the HCV infection pattern among HIV-positive MSM. If changes in these patterns occur, they could lead to HCV dissemination amongst HIV-negative MSM and may decrease the impact of unrestricted HCV treatment for HIV-infected MSM on the HCV epidemic in MSM in general.13 Very recently, Hoornenborg et al. showed that at the start of the Amsterdam PrEP study, the prevalence of HCV infection was 4% as 15 of the 375 MSM were chronically infected with HCV.14 This illustrates that in a subgroup of HIV-uninfected MSM, the prevalence of HCV infection may be very substantial and this contrasts with what has been reported earlier about the HCV prevalence and incidence in HIV-negative MSM.6,15
The objective of this study was to describe a series of cases and therefore create increased awareness about newly acquired HCV infections in HIV-uninfected MSM in the Netherlands and Belgium. All had tested negative for HCV in the recent past.

Cases of HIV-negative MSM with a newly acquired HCV infection were collected in the context of an acute HCV treatment study (the Dutch-Belgian prospective multicentre study on the treatment of acute HCV infection (DAHHS-2, NCT02600325) or within an PrEP-project in Antwerp (Be-PrEP-ared; EudraCT2015-000054-37). Patients were initially diagnosed by their GP, their STI clinic, their HIV specialist or the PrEP project before they were referred to the DAHHS-2 study team.
All reported patients had tested negative for HCV in the recent past. Patients were screened for HCV for different reasons in different settings as stated above and in table 1. HCV testing was done according to the local standard of care, which in all cases consisted of screening for HCV with HCV antibodies. Acute HCV was defined as a positive anti-HCV immunoglobulin G and a documented negative anti-HCV IgG in the previous 12 months.1 Patient characteristics and risk factors were retrieved from the patient files by the treating physician and transferred to the study coordinators after anonymisation.
Both studies were approved by the institutional medical ethics committees. Enrolment in these studies was voluntary and written informed consent was obtained in which the patients described in this report agreed that data and blood samples could be used for research purposes.

From 1 January 2016 to July 2017 a total of ten HIV-negative MSM with a recently acquired HCV infection were reported (table 1). HCV infection was diagnosed at a sexually transmitted infection (STI) clinic (n = 2), by the general practitioner (n = 2), by their infectiologist (n = 1) or at their PrEP clinic (n = 5). All patients had a documented negative HCV test within the year preceding the HCV diagnosis. Of the patients diagnosed at the PrEP clinic, one was diagnosed before the start of PrEP and four after the start of PrEP. Median age was 39.5 years (range 25-59). HCV genotype 1 was found in four patients, genotype 4 in two patients and the genotype was unknown in four patients. All patients reported unprotected anal intercourse, four had a concomitant STI at the time of HCV diagnosis and six reported drugs use during sex (chemsex). One patient reported intravenous drug use during sex (slamming). Clinical symptoms were non-specific or absent. Two patients were diagnosed after they had been informed of a HCV diagnosis in a partner. 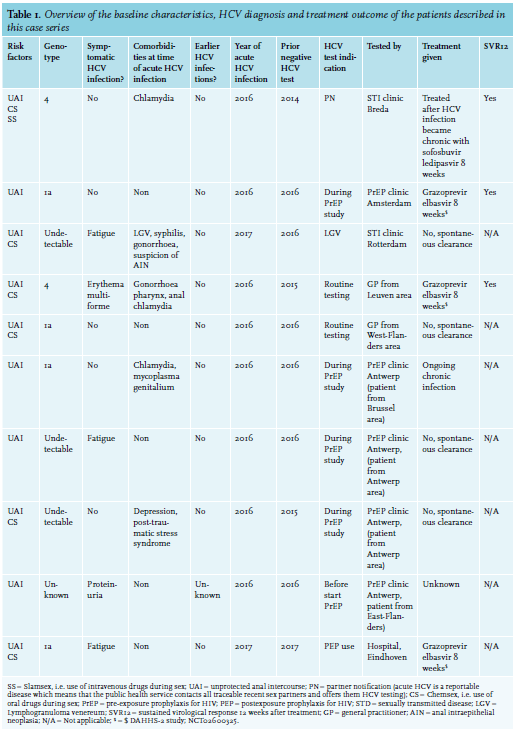 Our case series shows that, even without an active screening policy, HCV infections are diagnosed in HIV-negative MSM as we were able to describe 10 cases of newly acquired HCV infections in Dutch and Belgian HIV-uninfected MSM. Other recent publications on HCV infections in HIV-negative MSM were the result of an active screening policy as part of an observational study or a PrEP program.14,16 Furthermore, very few studies on the epidemiology of HCV in HIV-uninfected MSM are available and none were collected in a way that incidence rates of acute HCV infection in HIV-negative MSM can be calculated to properly address the problem.6,7,14,16-18 By design, case series cannot help to reliably estimate the size of the problem. We therefore call for a nationwide epidemiological study to get a reliable estimate of the prevalence and incidence of and insight into risk factors for HCV infection in HIV-uninfected MSM.
Not surprisingly, all reported unprotected anal intercourse and most had other concomitant STI diagnoses and six used non-injection drugs during sex. These are known risk factors for sexual HCV transmission in HIV-positive MSM.19 In the UK, the British Association of Sexual Health and HIV (BASHH) recommends to at least consider testing MSM for HCV if they are considered at high risk for HCV infection (independent of HIV status).20 In the Netherlands guidelines for the STI clinics advise testing HIV-positive MSM and MSM notified for HCV, MSM diagnosed with a lymphogranuloma venereum infection and MSM refusing an HIV test.21 In Belgium, there is no national guideline for HCV testing in HIV-negative MSM. Our case series, together with the high prevalence of chronic HCV infection in the AmPrEP project,14 call for HCV testing of MSM at Dutch and Belgian STI clinics in order to get reliable data of the HCV prevalence and incidence in 2018. PrEP programs should include regular HCV testing and MSM who start using PrEP outside the context of an official PrEP program should be tested at STI clinics.22 In a recently published systematic review, daily oral PrEP use was associated with a significant increase in rectal chlamydia and increase in any STI diagnosis,23 which emphasises the need for STI as well as HCV prevention strategies for PrEP users and their partners.
Second, as multiple parties are involved in the care of MSM (HIV centres, STI clinics, general practitioners) collaboration is needed if HCV elimination is to be pursued. Last but not least, the development and validation of an HCV risk score for HIV-negative MSM, as has been done before for HIV-infected MSM, could facilitate targeted HCV testing in the future.24
According to the definition for acute HCV infection by the European AIDS Treatment Network consensus panel,1 all our patients fulfilled the criteria for acute HCV, except for one patient in whom an earlier negative test was missing. And although he was ‘directly’ diagnosed after a recent partner notification, we cannot say for sure that he had an acute infection. Perhaps this patient is better defined as a recent infection according to definitions of Hajarizadeh et al.25
Our case series has several limitations. Because our cases were not identified during a prospective surveillance study, risk factors for HCV infection cannot be identified as we cannot compare our cases with HCV-negative controls. Furthermore, we have no denominator and therefore no estimate of the prevalence and incidence can be given. Also, we report on Dutch and Belgium cases. This is due to the fact that the acute HCV treatment study (DAHHS) is recruiting patients in the two neighbouring countries. Although the healthcare systems in these two countries are very alike, two important differences should be mentioned. In Belgium HCV therapy for patients with F0 to F2 fibrosis is currently restricted to patients that are HIV/ HCV-coinfected, while in the Netherlands restrictions are no longer in place. In contrast, at the time of writing this manuscript, PrEP was available free of charge in Belgium but not in the Netherlands, except for a small group of MSM participating in the AmPrEP program.
In conclusion, in the changing landscape of TasP and PrEP, close monitoring of HCV infection among HIV-uninfected MSM is needed to improve case finding of HCV infection and decide upon the best testing policies of HCV infection in HIV-negative MSM.

Data from this manuscript were presented at the 11th edition of the Netherlands Conference on HIV Pathogenesis, Epidemiology, Prevention and Treatment (NCHIV) which took place on in the Royal Tropical Institute (KIT) in Amsterdam on 21 November 2017; abstract number P04.