Ticking off diagnoses of abdominal pain: early neuroborreliosis with radiculopathy 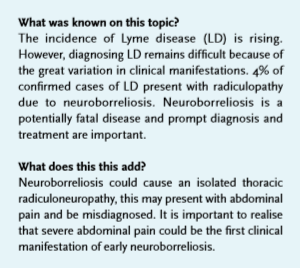 Lyme disease (LD), caused by the spirochete Borrelia burgdorferi, is the most common tick-borne illness, with more than 22,000 cases in the Netherlands each year.1 The clinical presentation of LD varies and about 4% of confirmed cases present with radiculopathy.2 This usually presents with a painful radicular syndrome but in the case of an isolated thoracic radiculoneuropathy, it may present with abdominal pain and is easily misdiagnosed. Neuroborreliosis is a potentially fatal disease and prompt diagnosis and treatment are important. This case report describes a patient with unexplained abdominal pain that eventually turned out to be LD.

A 71-year-old woman was referred to an Emergency Department in the Netherlands for consultation of the gastroenterologist because of severe abdominal pain. Her medical history was unremarkable. Eight weeks before she had suffered from temporary lower back pain, myalgia, fever and varying burning sensations and tenderness on the head and in both upper legs; subsequently she had developed moderate abdominal pain with abdominal distension and diarrhea that was considered a self-limiting gastroenteritis. However, several weeks later progressive abdominal pain occurred with nausea and myalgia. The pain was continuous and sharp, located in the lower abdomen and unrelated to oral intake, defecation or body position. Her vital signs were normal. She was alert and cooperative. There were normal abdominal sounds and there were no signs of peritonitis. Physical examination of the chest, vertebral spine and a general neurologic exam were normal; she had a normal gait, the Laseque’s test was negative and there were no signs of sensory loss. General laboratory tests, except for C-reactive protein 34 mg/l (reference: < 8 mg/l) and leucocytes 11 x 10 ^ 9/l (reference: 4-10 x 10 ^ 9/), were normal. Urinalysis, blood- and fecal cultures were also normal. Because the abdominal pain appeared to be severe without specific signs pointing to a clear diagnosis, a computed tomography (CT) scan of the chest and abdomen was performed to rule out common causes of abdominal pain such as peritonitis, appendicitis, cholecystitis, pancreatitis, intra-abdominal malignancy, ischemic bowel disease, vasculitis and pleural abnormalities. The CT was normal. She was admitted for pain management and further diagnostic workup. A malignancy of the digestive tract and inflammatory and ischemic bowel disease were ruled out by colonoscopy and gastroscopy. MRI of the small intestine was normal. Meanwhile, she developed fever. A whole-body positron emission tomography-CT (PET-CT) scan was performed that revealed no abnormalities. In combination, the ‘normal’ results of the extensive diagnostic tests ruled out the majority of the the abovementioned causes.
Going over her history again, she emphasized that she had stayed in a high-endemic area for ticks and had suffered a possible tick bite without any sign of  erythema migrans.  We decided to test for LD. Serologic tests were consistent  with a recent  B. burgdorferi  infection  (table 1). Additionally, testing of cerebrospinal fluid confirmed the diagnosis of neuroborreliosis (table 1). As abdominal pain was the only symptom that persisted over a course of several weeks, we concluded this must have been due to radiculoneuropathy. She was treated with ceftriaxone 2 gram intravenously for 2 weeks. After several days the abdominal pain gradually disappeared and she finally fully recovered (table 1).

Diagnosing LD can be difficult because of the great variation in clinical manifestations. Abdominal pain is generally not considered a sign of LD. Yet, it is important to realize that severe abdominal pain could be the first clinical manifestation of early neuroborreliosis. Neuroborreliosis is a potentially fatal disease and prompt diagnosis and treatment are important. Furthermore, this case demonstrates the necessity of re-examining the medical history of a patient with unexplained clinical signs.
Only a few cases have been described where abdominal pain was a first clinical manifestation of early neuroborreliosis.3-5 In these cases, abdominal pain was accompanied by facial paralysis, the so-called Bannwarth syndrome. Our case presented with abdominal pain only. At initial presentation there were no clear signs of radiculopathy or pain in specific dermatomes that could distinguish a neurological cause of abdominal pain from other more common causes of abdominal pain. We did not test specifically for abdominal nerve (i.e. sensory, motor and reflex) changes because we were not aware of the possibility of radiculopathy caused by neuroborreliosis. Although there were no specific neurological signs, the criteria of neuroborreliosis were met during her stay in the hospital, namely headache (varying burning sensations/tenderness on the head), a clinical suspicion of radiculitis and pleocytosis of cerebrospinal fluid with specific antibodies against B. burgdorferi. Characteristics of early neuroborreliosis are a high production of intrathecal IgM antibody B. Burgdorferi and lymphocytic pleocytosis. Although the diagnosis of neuroradiculopathy was not confirmed by electromyography, the quick response to antibiotic therapy further supported it.
Notwithstanding the low sensitivity of serologic tests for detecting early LD, it might be useful to distinguish between early and late LD. In this case the diagnostic tests of blood and CSF indicate an early manifestation of LD, early neuroborreliosis.
Because of unexplained severe abdominal pain, several diagnoses were considered and extensive diagnostic tests were performed. As the combination of normal laboratory tests, abdominal ultrasonography and CT imaging ruled out the majority of these diagnoses as cause of abdominal pain, we consider the endoscopies, MRI of the small intestine and PET-CT to be overdiagnostics. It would have been better to focus on ruling in a diagnosis of LD, because the patient’s symptoms became apparent after a suspected tick bite during a stay in a high-endemic area.

In conclusion, as the incidence of LD rises it is important to realise that severe abdominal pain could be the first clinical manifestation of early neuroborreliosis with radiculopathy.1,2 Other clinical clues for this diagnosis are abdominal distension due to abdominal wall weakness, abdominal pain and facial paralysis or cranial neuropathy (Bannwarth syndrome), radiculopathy in one or multiple dermatomes (i.e. pain and dysesthesia) and signs of meningism. Furthermore, instead of doing extensive diagnostic tests, it is important to scrutinize the patient’s medical history in the presence of unexplained clinical signs.