Cyst infection may occur as a complication in autosomal dominant polycystic kidney disease (ADPKD) and autosomal dominant polycystic liver disease (ADPLD) and results in considerable morbidity and mortality.1,2 Cyst infections are thought to arise from haematogenous spread of translocated gut bacteria (hepatic cyst infection) or ascending urinary tract infection (renal cyst infection).3 Escherichia coli is the most frequently isolated microorganism in both hepatic and renal cyst infection.4 Diagnosing cyst infection may be difficult as a definite diagnosis can only be made upon presence of cyst aspirate with inflammatory cells and bacteria.5 In most cases, a cyst aspirate is not routinely taken. Therefore, physicians are likely to make clinical decisions using a mix of clinical, biochemical and imaging findings,6 which led to the development of several diagnostic algorithms for patients in whom cyst infection is suspected.7,8
The first line of treatment of cyst infection consists of antibiotics. There is no evidence base for the choice of antibiotic therapy. Fluoroquinolones are traditionally selected due to their favourable pharmacokinetic properties as ciprofloxacin readily diffuses in hepatic and renal cysts.9,10 However, antibiotics often fail to control the infection. This leads to frequent switching between antibiotic classes and ultimately to invasive action in an attempt to control the infection.11
We hypothesise that patient-related and clinical factors (age, gender, serum inflammation parameters, comorbidities, history of solid organ transplantation) modify the risk for additional invasive measures that are required to control the infection.12 The aim of the present study was to investigate factors that predict escalation of care in a nationwide cohort of 77 patients who developed cyst infection.


Study design
We established a multicentre retrospective cohort of patients who were diagnosed with cyst infection. Patients were enrolled at four tertiary referral centres in the Netherlands which participated in the DIPAK-1 Study. This cohort study is reported in accordance with the Strengthening The Reporting of OBservational studies in Epidemiology (STROBE) statement (supplementary table 1*).13 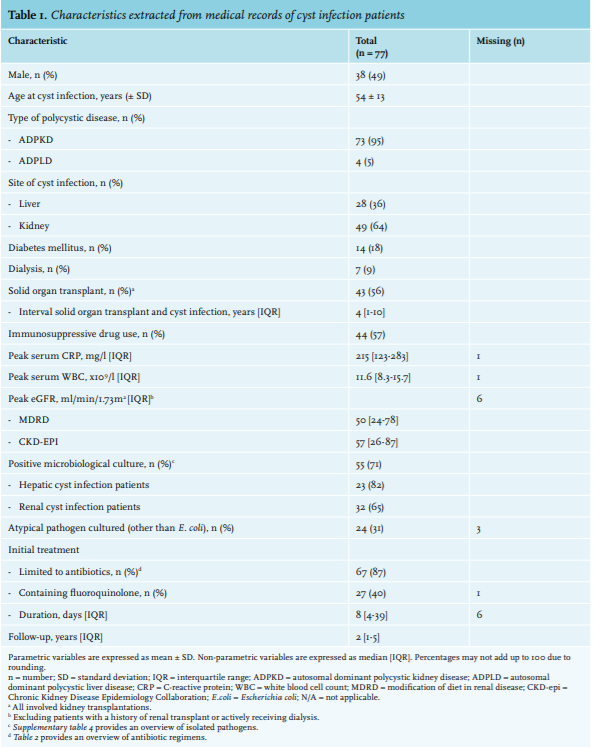 Setting and participants
We identified ADPKD and ADPLD patients through inspection of a number of local and national databases. The local databases are established because of financial reimbursement systems that register the diagnosis of patients using general Diagnosis Treatment Combinations (DTCs). The national database consisted of RENINE (Registration Renal Replacement Therapy the Netherlands), a Dutch foundation that registers all renal transplant recipients in the Netherlands. The DIPAK-1 Study group is an investigator-driven, multicentre, open label, randomised controlled trial, planned to enrol 300 individuals who are aged 18-60 years, with an estimated glomerular filtration rate (eGFR) of 30-60 ml/ min/1.73m2. 14
We included ADPKD and ADPLD patients diagnosed with either hepatic or renal cyst infection. We diagnosed cyst infection in case of a positive cyst aspirate (white blood cells and bacteria) or when cyst infection was considered by the individual physician to be stated in the medical record in the combined presence of: 1) serum C-reactive protein (CRP) > 50 mg/l, 2) body temperature ≥ 38.5°C and 3) abdominal pain.6,15 Medical records were screened for patients who met the inclusion criteria for cyst infection. We excluded patients if: a) cyst infection was a complication of aspiration sclerotherapy, b) the site of cyst infection was not documented, c) data on initial treatment were incomplete or d) ADPLD or ADPKD was not reported in the medical chart. 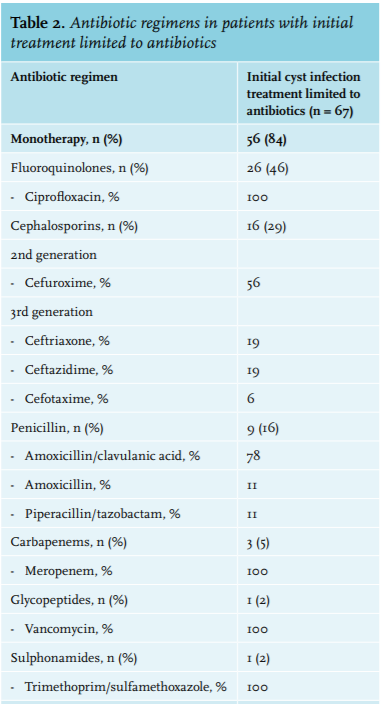 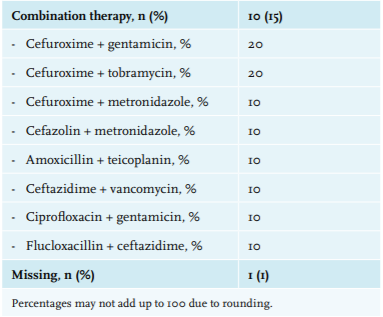 Outcomes
We defined any procedure that aimed to breach the wall of the infected cyst, either through percutaneous access or surgery as escalation of care.

Analysis
We performed all statistical analyses using SPSS statistical software package version 22 (SPSS Inc., Chicago, IL). Chi-square test was used for dichotomous data, Student t-test for parametric data and Mann-Whitney U test for non-parametric data. All tests were two-tailed and a p value of < 0.05 was considered statistically significant.
As the expected incidences of the outcomes investigated in this study were high, we calculated adjusted risk ratios to avoid any possible misinterpretation of odds ratios (OR) as risk ratios (RR).18 We selected Poisson regression as an alternative for binary logistic regression to obtain adjusted RR instead of OR.19 To correct for the use of binary outcomes, we used a robust error variance procedure to correct for the incorrect assumption of Poisson distributed outcomes.20
Variables with a p value of < 0.2 in univariate analysis were included in the multivariate modified Poisson regression model with manual backward elimination of non-significant variables. A p value of < 0.05 was considered to be statistically significant. We performed univariate and multivariate analyses on both the original and imputed datasets. 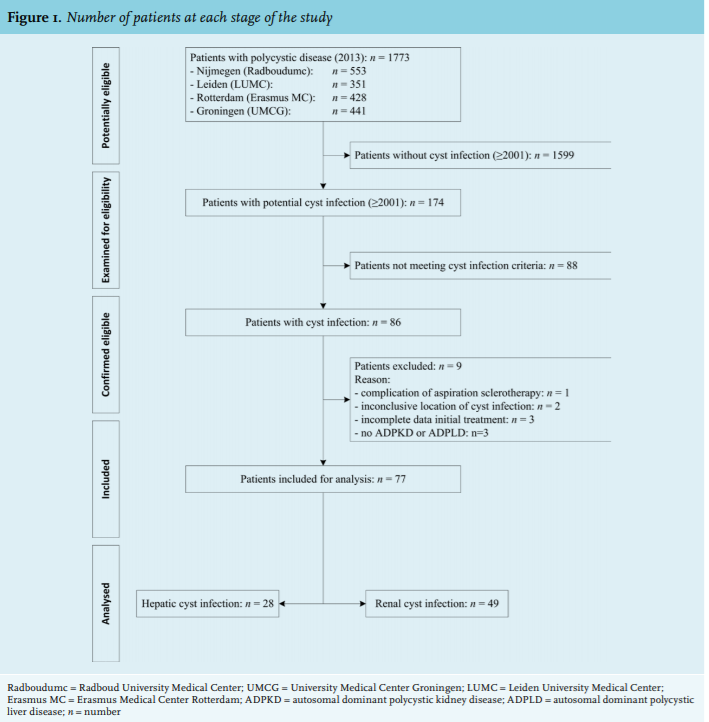 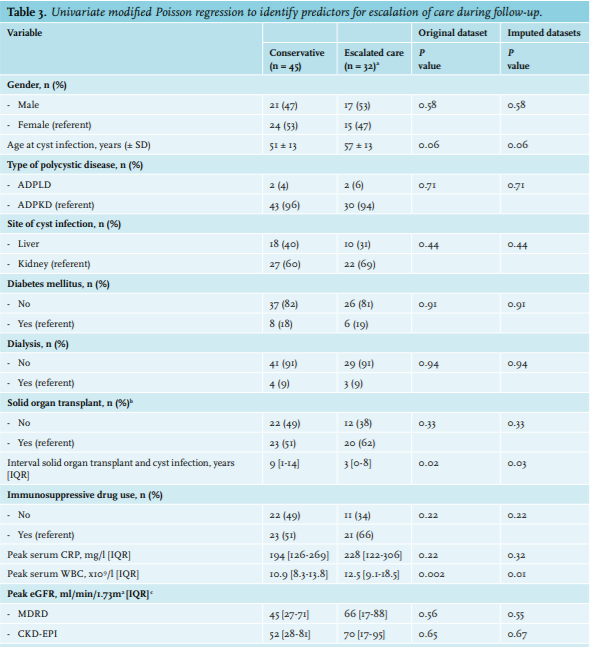 Predictors for escalation of care
Selected variables (p value < 0.2 in univariate analysis) were entered into the multivariate model (table 4). Multiple imputation had no effect on the selection of predictors (supplementary table 6). Exclusive isolation of E. coli decreased the risk for escalation of care (RR 0.55, 95% CI 0.34-0.89, p = 0.02) (figure 2). In contrast, if peak serum WBC increased or the interval between transplantation and cyst infection decreased, patients were more likely to be exposed to escalation of care (RR 1.04, 95% CI 1.01-1.07, p = 0.008 and RR 0.92, 95% CI 0.86-0.97, p = 0.005, respectively). Age at cyst infection was discarded in the final model. In contrast to the imputed datasets, the presence or absence of atypical pathogens did not predict escalation of care in the final model using the original dataset (supplementary table 7). 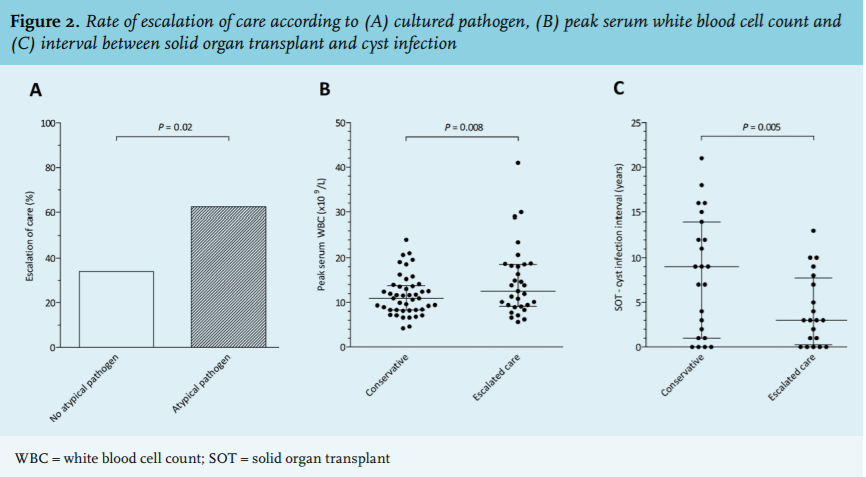 The key finding of our multicentre retrospective cohort study is that increasing serum WBC, isolation of pathogens other than E. coli and a shorter transplant-infection interval increases the risk for escalating care to the point of puncture or operation of the cyst.
We identified several factors in our cohort that increase the risk for treatment escalation. Previous studies on cyst infection involved single-centre cohort studies and focused on the clinical, microbiological and imaging aspects of cyst infection. None specifically investigated factors that influence the need for invasive treatment.3,4,15,21-23 In this study we found that patients with a longer interval between solid organ transplantation and development of cyst infection were less likely to be exposed to escalation of care. This observation might be explained by a reduced need for immunosuppressive drugs in patients who are clinically stable.24,25 This could explain the observation that these patients are more capable of clearing the infection. Alternatively, the early period after solid organ transplantation could warrant a more aggressive (i.e. invasive) approach to cyst infection to benefit the outcome of transplanted allografts.26,27
Increasing serum WBC and isolation of atypical pathogens both independently increase the risk for treatment escalation. Serum WBC reflects infection severity. In a study investigating acute pyelonephritis, a severe increase in serum WBC predicted clinical failure.28 E. coli is isolated in most cases of cyst infection.6 In the presence of an alternative pathogen, treatment limited to antibiotics could be less effective as successful eradication of alternative bacteria might be more challenging. Two systematic reviews on the management of hepatic and renal cyst infection, respectively, show that in case an alternative micro-organism is isolated (e.g. Enterococcus faecium), escalation of care is more likely.11,29
In patients with high serum WBC, isolation of atypical pathogens or a history of solid organ transplantation, the risk of failing conventional antibiotic treatment increases. Given these results, it is reasonable to consider alternative treatment options such as percutaneous cyst drainage, (partial) resection or even kidney and/or liver transplantation.
The main strength of this study comes with its size as we identified ADPKD and ADPLD patients who developed hepatic or renal cyst infection in four Dutch tertiary referral centres. This approach, combined with the use of broad inclusion criteria, enhances the generalisability of our findings. A potential limitation is the retrospective nature of our study and use of data not primarily intended for study purposes. This resulted in the potential exclusion of a large proportion of patients who did have cyst infection but did not meet the inclusion criteria due to missing data. We used multiple imputation to correct for missing data and, as such, reduced bias and loss of power. Moreover, the modified Poisson regression model is very reliable even in relatively small sample sizes.20 We did not include total liver volume and total kidney volume as predictors. A recent study showed that infectious complications in ADPKD do not correlate with the total liver volume;30 it remains unclear whether total kidney volume predicts cyst infection outcome. Finally, we combined patients with hepatic and renal cyst infection. Univariate analysis showed an imbalance for age and peak serum WBC (supplementary table 5). We hypothesised that its effect on the outcome would be limited as both covariates have a theoretical effect on the outcomes in both hepatic and renal cyst infection patients. We corrected for this by including these covariates in the multivariate model. Moreover, adding the site of cyst infection to the final multivariate model had no significant effect (supplementary table 8). To conclude, we show that high serum WBC, presence of pathogens other than E. coli and early infection after transplantation predict the need for change to invasive procedures.

*The supplementary material is available on request from the editorial office (marina@alphatekst.nl).