Hurry up, it’s quiet in the emergency department

Crowding is defined as a situation in which the identified need for emergency services outstrips the available resources in the emergency department (ED), hospital, or both,1 and forms a universal problem for EDs.2 Various studies have shown that crowding is not only bad for patient satisfaction, it also actually places the patient at risk: complication rates are higher and even mortality is higher.3-5 ED crowding is a multifactorial problem, spanning the entire healthcare delivery system. Factors contributing to crowding can be categorised as increasing inflow (e.g. inappropriate ED use), decreasing throughput (e.g. inappropriate personnel capacity) or diminishing outflow (e.g. a lack of in-hospital beds).
Crowding is a very contemporary problem in the Netherlands. Van der Linden et al. demonstrated in 2013 that 68% of hospitals experienced crowding several times a week or even daily.6 Over the last couple of years a sharp increase in the number of ambulance bans declared by hospital administrators as a response to crowding was observed,7 resulting in longer transport times, which in itself can affect the quality of care provided.
Solutions to crowding are not universal, but can be found in diminishing inflow, shortening throughput times or improving ED outflow. Reducing inflow can be realised by, for example, better identification of patients who can be treated in a non-urgent care setting, by improving collaboration with general practitioners or by a temporary ambulance ban. Shorter ED throughput times can result from minimising the time needed for diagnostic tests or by increasing personnel capacity in the ED, whereas improved ED outflow can be realised by, for instance, creating observation wards.8 However, there is a major lack of evidence around many of these interventions,9 and implementation often requires careful mutual adjustment with all parties involved and/or additional funding. This can be a lengthy process when you feel the burden of ED crowding every day. It is important that, in the meanwhile, we aim to identify simple strategies focussing on optimising efficiency of the available resources, which can be adopted in the ED here and now.
Therefore, the objective of the current study was to examine inflow and outflow patterns of an average ED in order to investigate whether it is possible to improve the timing of internal efforts as a potential measure to prevent crowding.

Study setting and population
This is a retrospective cohort study of inflow, throughput and outflow data of all patients visiting the ED of the Medical Center Leeuwarden in the year 2015. The Medical Center Leeuwarden is a 671-bed teaching hospital in the northern part of the Netherlands, and is a regional centre for e.g. cardiac interventions and vascular surgery. At the time of our study the ED had 17 beds, and has an annual census of around 25,000 patients/year, which is the average ED size in the Netherlands.10

Data analysis
The average throughput time was calculated for all patients as the difference between inflow and outflow time, and stratified by the time of the day. In order to investigate the relation between inflow, throughput and outflow, a convenience sample of the 10 busiest days (as measured by the longest throughput times) was studied. For each of these days the cumulative number of patients arriving, being triaged and being discharged was analysed as a function of the time of the day. All plots were constructed using Microsoft Excel (Microsoft corp. Seattle, USA).

Ethics
Our study only involved analysis of department performance data and as such was determined to be exempt research by our local ethical committee (protocol number nWMO2017/225).

During the study period, 24,823 patients attended our ED. The majority (79%) of the patients seen in the ED were referred by their general practitioner and/or the EMS service, and 51% of the patients had a triage urgency of 1-2 (highest urgency categories of the 5-point Manchester triage system). Average throughput time for our population was 130 minutes.
For our study population as a whole, we discovered a characteristic ED input pattern, with relatively quiet hours until the early morning and a sharp increase in the number of patients attending the ED in the course of the morning (figure 1). Inflow peaked around 11.00 AM, whereas discharge (outflow) peaked later on the day, around 6.00 PM. The time between inflow and outflow peaks was well beyond the average daily ED throughput time (difference between inflow time and outflow time) of 130 minutes as found for this study period.
In the convenience sample of the 10 days of 2015 with the longest throughput times, we discovered a very distinctive pattern too (figure 2, example of one of these days). During the night the cumulative number of patients being discharged tightly follows the number of new patients attending the ED. As a consequence, by 9.00 AM the ED is nearly empty. However, after 9.00 AM more patients start to arrive, and the ED capacity gradually fills up until around 1.00 PM when maximum capacity (17 beds) is reached. Then there is a sudden rise in the number of patients being discharged, and from this moment on, throughput time decreases again, as can be seen from the horizontal distance between the curves in figure 2. However, it was not until 4.00 PM before the inflow and outflow were in equilibrium again. Only then did the total number of patients present in the ED start to decrease slightly, and capacity for new patients could be created (figure 1). 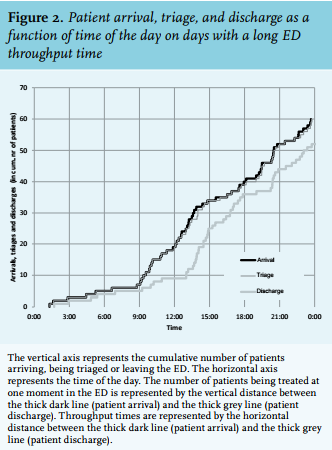 ED crowding is a problem of all times, and countless solutions have been proposed over the last decades to alleviate the burden.10 These solutions concentrate on ED inflow, throughput and outflow. Of these, uncontrolled inflow is usually perceived as a big contributing problem, which is why many measures have been investigated to reduce inflow. However, inflow factors are hard to control by individual hospitals, since they are highly influenced by demographic, and socioeconomic factors and by the availability and concentration of care.11 Most Western countries (the Netherlands included) face an ageing population. People are not only getting older, with a resultant increase in comorbidities, they also live longer independently instead of in institutions. When attending the ED, they often have multiple problems. As a result, they have a longer than average length of stay, use more ED resources, and often have to be hospitalised.7 At the same time, the government policy to concentrate acute care has resulted in a steady decline in the number of 24/7 EDs in the Netherlands over the last five years (from 93 to 87).12 These factors contribute to an increase in the number of patients presenting to the ED with complex problems. Since individual hospitals are unable to address these factors, they usually tend to focus on measures to reduce the inflow of patients without urgent or complex complaints, such as self-referring patients with sprains, or patients with planned re-visits. However, it has never been demonstrated that these patient categories contribute to crowding.13
Therefore, hospital administrators should re-direct their focus to ED throughput, and aim to keep throughput times of all patients presenting to the ED as short as possible. This involves a careful analysis of department performance data in order to determine how much personnel is mandatory, which type of personnel should be contracted (nurses, physician assistants, emergency physicians, or other specialists) and how their shifts should be scheduled. We performed such a throughput analysis for our department and found that inflow peaked around 11.00 AM, whereas outflow peaked around 6.00 PM. Based on the average throughput time of 130 minutes in our study population, the increase in output would have been expected around 1.00 PM. This indicates that the ‘midday surge’ in patient arrivals could not be handled adequately by the ED system. From the analysis of the 10 days with the longest throughput times, it becomes clear that throughput times are longer in the morning hours, when it is relatively quiet. When the ED is filling up, with the prospect of crowding, around 1.00 PM, throughput times are starting to decrease again. However, the backlog of patients that was building up during the morning hours had consequences during a significant part of the day, since it was not until 4.00 PM before inflow and outflow were in equilibrium again. Despite the fact that only a few beds are being used in the morning, this is the right time to speed up processes to avoid a backlog of patients building up. This may seem counterintuitive, but accepting longer throughput times during the relatively quiet hours results in patient accumulation in the ED later in the day. Although we have not searched for reasons explaining the slower throughput times in the mornings, we speculate that several factors might contribute to this finding. First, there is a change of shift early in the morning. Patients arriving just before this change and who do not require immediate diagnostic studies or therapeutic interventions are usually handed over to the next shift (and therefore have to wait longer before they are seen by a doctor). Second, personnel capacity is not yet maximal during the early morning hours. Although the absolute number of patients attending the ED during the morning hours is lower than during the afternoon, the number of patients per nurse/doctor can be higher than during the busy hours. Furthermore, the pressure perceived by ED personnel to speed up the process is lower in the morning, since there is still capacity left in the ward to receive new patients. Finally, outflow factors might play a role as well, with less hospital beds being available during the morning hours when admitted patients have not yet been discharged. Therefore, it is important that hospital administrators schedule sufficient personnel to be able to discharge clinical patients early in the morning and to treat ED patients promptly during the relatively quiet hours. Healthcare providers at the same time should deliver care during these hours with the same efficiency as they aim for during the busy hours.
Our study has several limitations. First, it is a retrospective study, and thereby relies on data completeness and accurateness of registration. Second, our study is solely focused on throughput. A longer average throughput time during the quiet hours is just one of many factors contributing to crowding.1-4 As stated in our introduction, crowding is a multifactorial problem, and a focus on optimisation of the internal ED processes should not take place without consideration of outflow possibilities at the same time. Finally, even though the average ED throughput time of 130 minutes of our ED is comparable to the Dutch national average,14 inflow and outflow patterns cannot be generalised across various hospitals, since patient populations and ED staffing vary widely.

However, despite these shortcomings, our findings demonstrate that critical analysis of ED performance data can identify unexpected factors contributing to crowding. Rescheduling of ED personnel based on site-specific inflow and outflow patterns can be accomplished quickly and at relatively limited costs compared with many other measures. Therefore, we recommend that a careful site-specific analysis of inflow and outflow patterns is always made before other, more complex and/or costly, measures are instituted to prevent ED crowding.

Improved timing of internal efforts in the ED based on careful analysis of ED performance data should be an integral part of a system approach to prevent ED crowding.