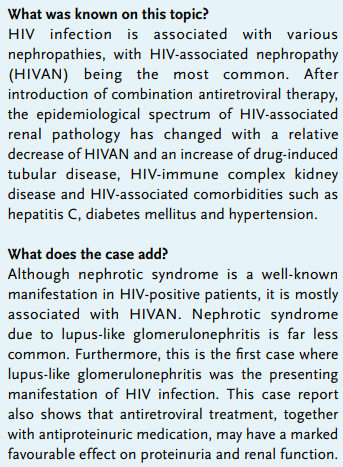 A 26-year-old Caucasian female was referred to our centre for a second opinion. A few weeks earlier, she was admitted to another hospital with malaise, generalised weakness and peripheral oedema of the lower extremities. Medical history included perinatal asphyxia and pulmonary embolism without an apparent cause (at the age of 24 years).
On physical examination, she was hypertensive (blood pressure 150/114 mmHg) and had severe oedema in both legs. Physical examination was otherwise unremarkable. Serum creatinine was elevated (table 1) and urinalysis showed glomerular erythrocyturia with 30-50 erythrocytes per high power field with < 1% acanthocytes and a few erythrocyte casts. Proteinuria was 13.1 g/24 hours. The differential diagnosis consisted of membranous nephropathy (including lupus), membranoproliferative glomerulonephritis or IgA nephropathy. A kidney biopsy showed active, diffuse and global lupus nephritis class 4/5 with endocapillary and mesangial proliferation and few sclerotic lesions. Immunofluorescence staining was positive for IgA, IgG, IgM, light chain type lambda and kappa and C1q/C3 (figure 1), Congo red was negative. Electron microscopy was not performed. Additional screening for ANA, ENA, and anti-DNA was negative; a weak cryoglobulin type 3 was detected along with a low complement factor C3 (0.69 g/l; normal 0.90-1.8 g/l) and normal C4 (0.21 g/l; normal 0.10-0.40 g/l).
Except for a dubious facial rash and pancytopenia (without haemolysis) there were no other criteria for systemic lupus erythematosus. The negative ANA and anti-DNA was also inconsistent with lupus disease, so another underlying disease was sought. Additional investigation revealed an HIV-1 infection with a viral load of 1.52*106 copies/ml and CD4 count 0.13*109/l (reference range 0.4-1.3*109/l). Serology for hepatitis B and C was negative. Antiviral therapy was started (dolutegravir, abacavir and lamivudine) in combination with antiproteinuric drugs (furosemide and enalapril). Along with a favourable virological response, renal function improved and the nephrotic syndrome went into partial remission (table 1). 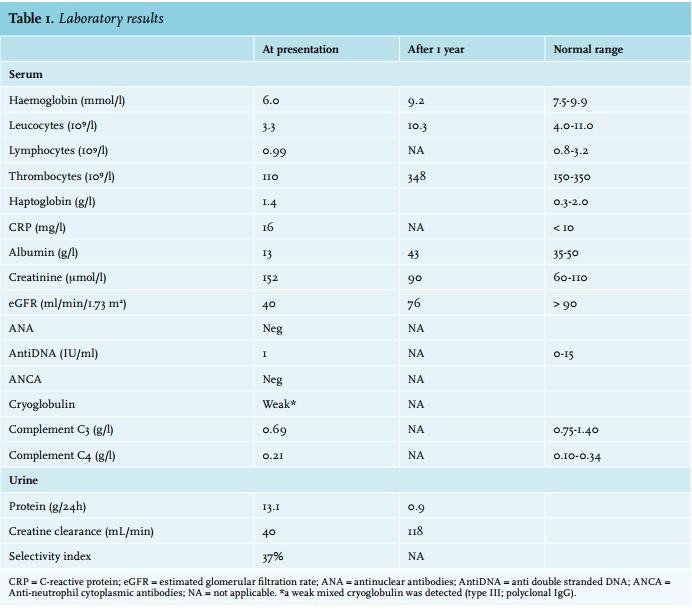 The most common HIV-associated nephropathy is focal segmental glomerulosclerosis (known as HIV-associated nephropathy, HIVAN), which was first reported in the USA in 1984. It is characterised by nephrotic range proteinuria, renal dysfunction and collapsing focal segmental glomerulosclerosis, due to direct viral infection of renal cells or the action of viral proteins.1 Without combination antiretroviral therapy (cART) renal function often rapidly progresses to end-stage renal disease. Treatment with cART is therefore considered mandatory.2 Due to the introduction of antiretroviral treatment, the incidence of HIVAN has decreased. This has changed the epidemiological spectrum of renal pathology associated with HIV, with a relative increase in other nephropathies such as HIV-immune complex kidney disease, cART-induced tubulotoxicity and HIV-associated comorbidities such as hepatitis C virus infection, diabetic nephropathy and nephrosclerosis.1,3-5 Thrombotic microangiopathy and amyloid A amyloidosis are less frequently seen, but are also associated with HIV and kidney disease.

HIVICK is characterised by the presence of glomerular and mesangial immune deposits and consists of a broad spectrum of histopathological entities such as membranous nephropathy and lupus-like nephritis.5 According to the literature, patients with HIVICK generally have less advanced HIV infection, usually have only mild proteinuria and less frequently progress to end-stage renal disease compared with HIVAN.5,6 In retrospective case series of HIV-positive patients, HIVICK is found in about 4-30% in renal biopsies (mostly reported as membranous nephropathy, and only rare cases described as lupus-like nephritis).1,4,6 However, selection bias may have underestimated the true incidence of HIVICK. The pathogenesis of HIV infection in immune complex renal disease is poorly understood, and treatment is also less obvious. Most patients with immune complex kidney disease are already treated with cART, but for those who have not yet received antiretroviral therapy, such as this patient, treatment may have beneficial effects on renal outcome.1,5-10 Angiotensin-converting enzyme inhibitors or angiotensin receptor blockers are often prescribed in order to control blood pressure and proteinuria, with a few case reports that report prescribing immunosuppressive therapy.5,10-12 More literature on pathogenesis, treatment and outcome is warranted in this upcoming renal disease.