In the Netherlands, at the suggestion of both the Health Care Inspectorate (IGZ) and insurance companies, the Identification of Seniors At Risk – Hospitalised Patients (ISAR-HP) screening instrument is currently being promoted for use as a frailty indicator, for example in older patients with an indication for colon surgery.1 Comprehensive geriatric assessment (CGA) is subsequently advised for ‘frail’ patients in order to prevent functional decline. Identification of patients at high risk for functional decline is essential to ensure that interventions are targeted effective at those who will benefit most.2
The ISAR-HP is a recently developed screening instrument to predict 90-day functional decline in older patients who were acutely admitted to the department of internal medicine.3 Test characteristics were reasonable with respect to discrimination (area under the receiver operating curve, AUC), but the positive predictive value was rather low. Using the conventional cut-off score of ≥ 2 classified more than half of all older patients as being at risk for functional decline.3,4 However, classification was incorrect for 57% of the internal medicine patients in the development cohort and 64% of older patients undergoing cardiac surgery in a validation cohort, because no functional decline was experienced.3,4 As a consequence it is questionable whether using intensive interventions, such as the relatively time-consuming CGA, can be cost-effective.
The aim of the present study was to evaluate the performance of the ISAR-HP in predicting adverse health outcomes in acutely hospitalised older patients in two hospitals in the Netherlands. Predictive performance was tested by using different cut-off points of the ISAR-HP for predicting functional decline or mortality.

Study design and setting
The Acutely Presenting Older Patients (APOP) study is a prospective multicentre cohort study in older patients visiting the emergency department. Data were collected in the emergency departments of the Leiden University Medical Center from September 2014 until November 2014 and the Alrijne Hospital Leiderdorp from March 2015 until May 2015. In both hospitals patients were included 7 days a week for a period of 12 weeks. The inclusion criterion of the APOP study was all patients aged 70 years and older who visited the emergency department. Exclusion criteria were red on the Manchester Triage System (i.e. patients requiring acute medical attention, such as cardiopulmonary resuscitation), an unstable medical condition, refusal to participate by the patient, an impaired mental condition of patients in the absence of a proxy to provide informed consent, and presence of a language barrier. For the current analyses, all acutely hospitalised patients of the APOP cohort with an ISAR-HP score at baseline were included. The ISAR-HP scores were calculated afterwards and not noted in the patient records, to ensure that all patients received usual care. Written informed consent was obtained from all patients. The Medical Ethics Committee of the Leiden University Medical Center and Alrijne Hospital approved the study. A more detailed description of the study design can be found in a previously published paper.5

Characteristics
Baseline characteristics included age, gender, living situation, level of education, clinical specialism, number of medications, history of dementia, Katz ADL score and cognitive impairment. Independent living situation represents patients living independently on their own or with others, high education was defined as higher vocational training or university, and number of medications represents the number of medications used at home as reported by the patient. Clinical specialism corresponds to the responsible specialism on the ward patients were admitted to. The cognitive status was assessed with the six-item Cognitive Impairment Test (6CIT);6 this score ranges from 0 to 28, with a score of 11 or higher indicating moderate to severe cognitive impairment.7 Functionality two weeks prior to admission was evaluated by means of the Katz ADL score, which contains six items: bathing, dressing, toileting, transferring, eating and the use of incontinence material.8 Each item is scored as independent (0 points) or dependent (1 point), with higher scores corresponding to more dependency.

ISAR-HP
The ISAR-HP is a scorecard with four yes/no questions on needing assistance on a regular basis, use of a walking device, needing assistance for travelling and having received education after the age of 14 years (Appendix, figure 1). 3 The score ranges from 0 to 5 with a score of 2 or more indicating a high risk of functional decline. The originally developed regression model of the ISAR-HP was: 1 / 1 + exp (– ( –1.93 + 0.48 × ‘pre-admission need for assistance in IADL on a regular base’ + 0.81 x ‘use of a walking device’ + 0.57 x ‘need of assistance in travelling’ + 0.42 × ‘no education after age 14’)).

Outcomes
Originally the ISAR-HP was developed for predicting solely functional decline,3 but at the moment of obtaining an ISAR-HP score it is impossible to distinguish patients who will not die within 90 days of follow-up from those who will. Therefore, in the present study the ISAR-HP was validated for predicting the composite outcome of functional decline or mortality within 90 days of follow-up after hospital admission. Information on functional dependency was assessed by telephone. Functional decline was defined as either an increase of at least 1 point on the Katz ADL score 90 days after hospitalisation compared with two weeks prior to admission or moving from an independent living situation to a dependent living situation. Dates of death were obtained from the Dutch municipality records.
Additionally, the ISAR-HP was validated for solely functional decline, for which we used the same exclusion criteria as the development study.3 Patients with a maximum Katz ADL score at baseline (fully dependent patients) and patients living in a nursing home at baseline were excluded, because these patients could not decline further as defined in our study. Also patients who were lost to follow-up or died within 90 days were excluded.

Statistical analysis
The baseline characteristics are presented as numbers with percentages or medians with interquartile ranges (IQR). A minimum of 100 events was considered necessary to provide sufficient statistical power for external validation.9 Predictive performance of the ISAR-HP was assessed by examining measures of discrimination and calibration.
Discrimination of the ISAR-HP score was quantified by calculating the AUC. The sensitivity, specificity, positive and negative predictive values (PPV and NPV) and positive and negative likelihood ratio were calculated for using the conventional cut-off of ≥ 2 points, but also using other thresholds of the ISAR-HP score (≥ 1, ≥ 3 and ≥ 4). Calibration of the internally validated ISAR-HP regression equation was assessed by plotting observed versus predicted probabilities, calculating calibration slope and with a goodness-of-fit test (Hosmer and Lemeshow test10). Data were analysed using IBM SPSS Statistics version 23 (IBM Corp, Armonk, NY) and R Statistics version 3.3.0.11.

In the APOP study, 1965 consecutive older patients visiting the emergency department of the Leiden University Medical Center or Alrijne Hospital were eligible for participation. In total 1632 patients (83.1%) were included after informed consent, of whom 771 (42.2%) were subsequently hospitalised. After exclusion of three missing and three incomplete ISAR-HP scores, the study population for the present analyses contains 765 patients. Table 1 shows the baseline characteristics of the study population. The median age was 79 years (IQR 74-84), 374 patients (48.9%) were male and 698 patients (91.2%) were living independently either on their own or with others. Most patients were admitted for the clinical specialism internal medicine (242 patients, 36.1%), cardiology (168 patients, 22.0%) or surgery/orthopaedics (154 patients, 20.1%). The median Katz ADL score was 0 (IQR 0-2) and 172 patients (25.1%) had cognitive impairment.

Figure 1 displays the distribution of ISAR-HP scores. The median ISAR-HP score was 2 (IQR 0-4) and 432 patients (56.5%) were at high risk for functional decline or mortality when using the conventional cut-off of ≥ 2. In total 276 patients (36.1%) experienced functional decline or mortality within 90 days of follow-up. We first performed an external validation of the ISAR-HP. Figure 2 shows the calibration plot of the ISAR-HP for functional decline or mortality. Calibration was insufficient with a Hosmer and Lemeshow goodness-of-fit p-value of 0.007. Predicted probabilities were lower than the observed probabilities with a calibration slope of 0.877 and an intercept of 0.246, indicating an underestimation of the outcome.
The predictive performance of the ISAR-HP is shown in table 2. Accuracy of the ISAR-HP was reasonable, with an AUC of 0.69 (95%CI 0.65-0.73). External validation of the ISAR-HP for the conventional cut-off of ≥ 2 resulted in a sensitivity of 0.77 (95% CI 0.72-0.82), a specificity of 0.55 (95 %CI 0.51-0.60), a PPV of 0.49 (95% CI 0.45-0.54) which results in 45% incorrectly classified high-risk patients and 29% incorrectly classified low-risk patients. Additionally, although of limited clinical applicability, we validated the ISAR-HP for solely functional decline to allow comparison of performance compared with the original study (Appendix: table 1 and figure 2). After applying the exclusion criteria for functional decline (113 patients died, 30 patients were lost to follow-up, 17 patients were unable to demonstrate functional decline and 13 patients refused), 592 patients were included of whom 162 (27.4%) experienced functional decline. Discrimination was fair (AUC 0.72, 95% CI 0.67-0.76) and calibration satisfactory (Hosmer and Lemeshow goodness-of-fit p-value 0.068). The PPV and NPV were lower for all cut-offs, with a PPV of 0.42 (95%CI 0.37-0.48) and NPV of 0.89 (95%CI 0.84-0.92) for an ISAR-HP score of ≥ 2. 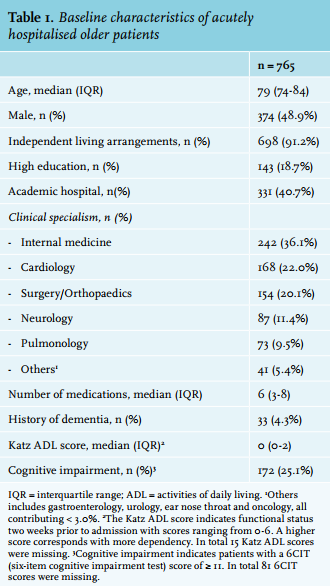 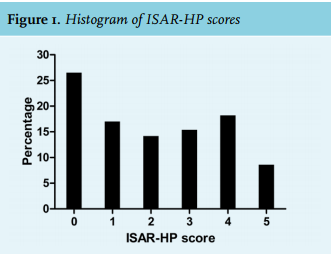 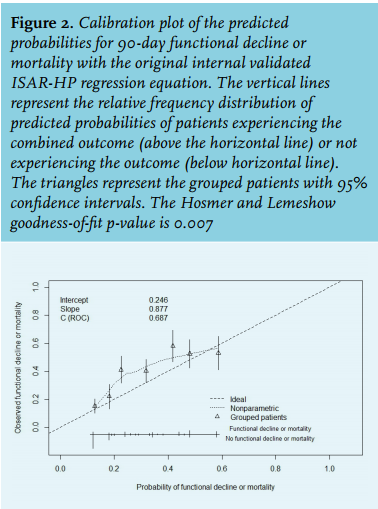 In conclusion, the ISAR-HP with the conventional cut-off of ≥2 incorrectly identifies a large group of patients as being at high risk for functional decline or mortality, and raising the cut-off to 4 only marginally improved performance. Caution is warranted to ensure efficient screening and follow-up interventions.

The authors declare no conflict of interest. The Institute for Evidence-Based Medicine in Old Age (IEMO) is supported by the Dutch Ministry of Health, Welfare and Sport and supported by the Netherlands Organisation for Health Research and Development (ZonMW project number 62700.3002). 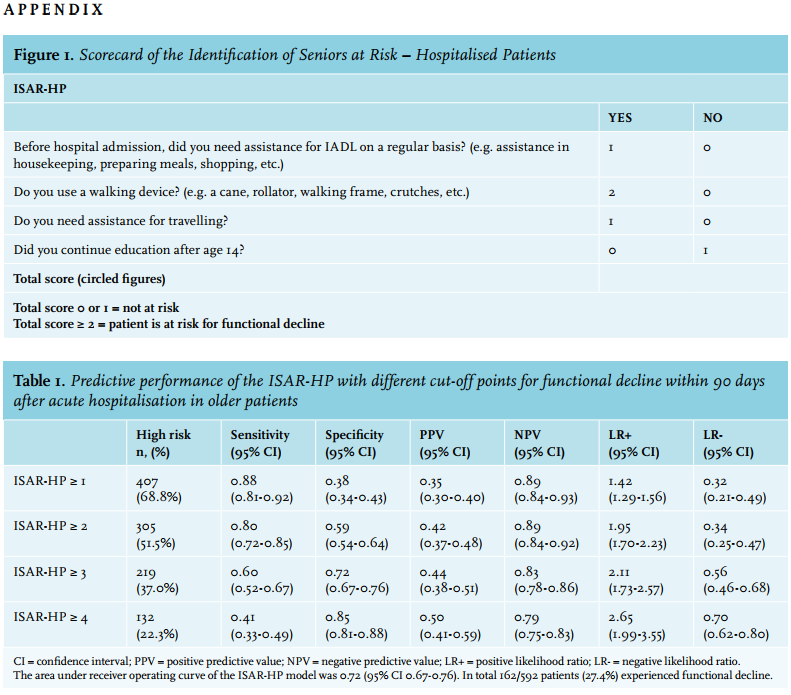 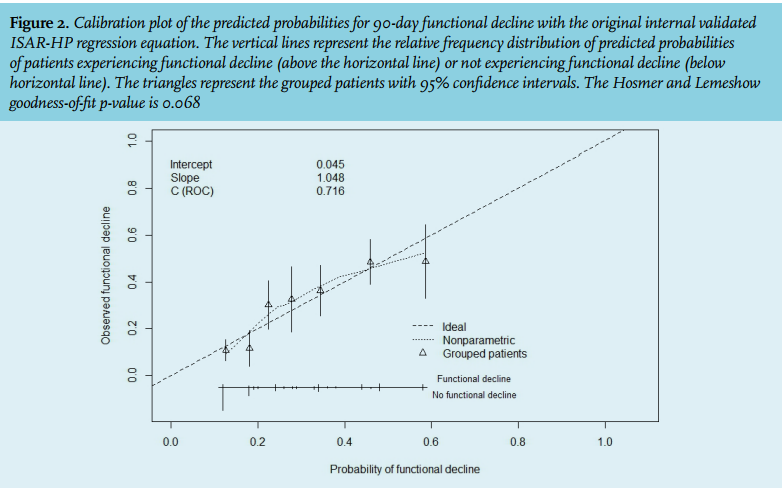