We report a case of recurrent torsade de pointes arrhythmia in a 48-year-old female patient with hypercalcaemia and newly diagnosed multiple myeloma.
On admission, she complained of fatigue, weight loss, dry cough and bone pain. A complete blood count showed normocytic anaemia (haemoglobin 7.9 g/dl), elevated plasma protein (140.6 g/l), renal insufficiency (creatinine 1.6 mg/dl, GFR(aMRD) 36.4 ml/min/1.7), hypalbuminaemia (27.9 g/l, range 35-52 g/l) and severe hypercalcaemia (3.91 mmol/l [4.1 mmol/l corrected for hypalbuminaemia], range 2.15-2.55 mmol/l). Potassium levels were normal (4.13 mmol/l, range 3.5-5.3 mmol/l). She received intravenous fluids and zoledronic acid. The electrocardiogram on admission showed no abnormalities and a normal QT time (QTc 387ms) (figure 1).
Shortly afterwards, the patient went into cardiac arrest and was resuscitated. She was transferred to the intensive care unit (ICU) and placed on calcium-free dialysis. Over the course of 24 hours, she experienced seven episodes of torsade de pointes requiring defibrillation (figure 2). Echocardiography revealed no structural heart disease and normal left ventricular function.
Bone marrow biopsy confirmed multiple myeloma (IgG kappa, 80% infiltration in bone marrow aspirate smears, M-gradient 73.8 g/l).
The calcium levels returned to the normal range after two sessions of dialysis and treatment with bortezomib, thalidomide and dexamethasone was started.3
No remission could be achieved after two courses of this treatment. She had multiple lines of therapy over the course of her illness, including lenalidomide, dexamethasone and bortezomib, chemotherapy with cisplatin, etoposide, cyclophosphamide and dexamethasone4 and autologous stem cell transplantation (Melphalan 200 mg/m2 ). She achieved only short-lasting remissions on all lines of therapy and was ultimately started on pomalidomide and dexamethasone, but died 10.5 months after her initial diagnosis. Over the course of her illness, hypercalcaemia recurred only once after progression on lenalidomide, dexamethasone and bortezomib, but no further arrhythmia was recorded.

Autopsy revealed lymphocytic and haemorrhagic myocarditis as the leading cause of death and also showed a thrombotic formation in the right atrium, pulmonary oedema, jaundice and intrahepatic cholestasis. Findings about jaundice and intrahepatic cholestasis dominated the last phase of the patient’s life and myocarditis was not suspected clinically while she was alive.

In our patient, there were no other risk factors for torsades apart from hypercalcaemia (no hypokalaemia, bradycardia, heart failure, left ventricular hypertrophy, hypothermia or hypothyroidism), although magnesium levels were not checked until two weeks after the first episode, when they were normal. The only medications she received before her first episode were morphine, dalteparin and paracetamol – none of which are known risk factors for either torsade de pointes or QT abnormalities.

Calcium plays an important role in cardiac conduction velocity and hypercalcaemia is usually associated with shortening of the QT interval, while torsade de pointes are most commonly expected in patients with QT prolongation.8 However, hypercalcaemia may cause torsade de pointes by enhancing early afterdepolarisation, which may have been a contributing factor in our case presented here.9

To the best of our knowledge, this is the first report of torsade de pointes as a complication of hypercalcaemia and multiple myeloma. It is important for haematologists and cardiologists to be aware of this rare, but serious, complication. 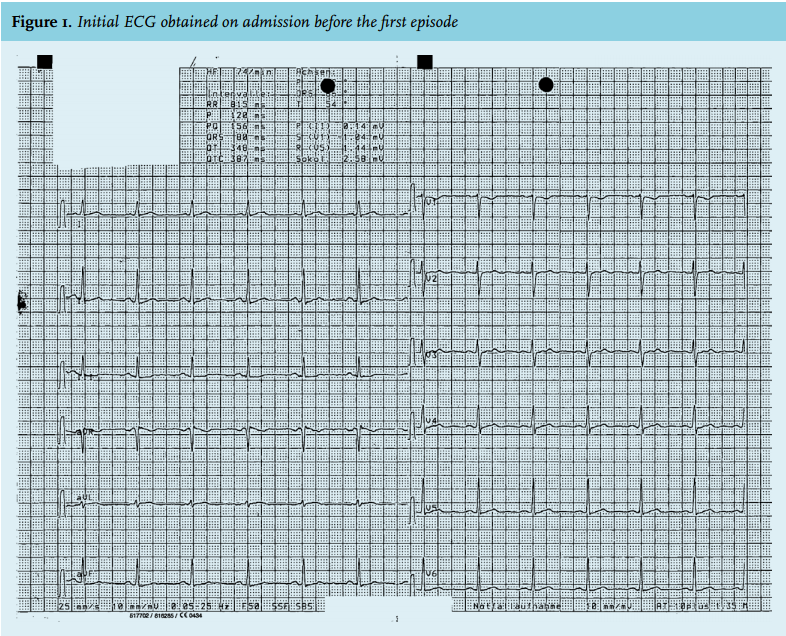 The authors declare that they have no conflict of interest.
This case report received no funding.