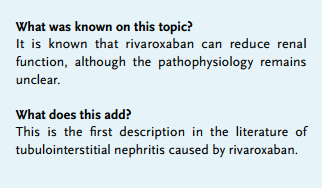 An 82-year-old male presented to his general practitioner because of fatigue, weakness and weight loss for three weeks. The patient’s history revealed hypertension, a DDDR pacemaker for a third-degree atrioventricular block and decreased renal function of unknown cause (estimated glomerular filtration rate (eGFR) 39 ml/ min/1.73 m2 ). His daily medication comprised amlodipine 5 mg, enalapril 20 mg, hydrochlorothiazide 12.5 mg and omeprazole 40 mg. Three weeks before presentation he was diagnosed with atrial fibrillation and started on rivaroxaban 15 mg. Several days before presentation the patient had stopped taking rivaroxaban because of his symptoms. Other medication had not been changed and the patient was not taking any over-the-counter medication or supplements. Laboratory assessment revealed an eGFR of 9 ml/min/1.73 m2 and the patient was referred to the hospital. At physical examination the patient’s blood pressure was 148/81 mmHg, pulse rate 62 beats/min and temperature of 35.8 °C. The patient appeared euvolaemic and further physical examination was unremarkable. Results of laboratory analysis including urinalysis are provided in table 1. Renal ultrasound showed normal sized kidneys of 12.2 and 13.6 cm and no postrenal obstruction.

Resonium and sodium bicarbonate were started, as well as ciproxin 500 mg to treat a urinary tract infection until urinary cultures proved negative after five days. The patient was also started on dialysis because of refractory hyperkalaemia. Renal biopsy was performed and showed extensive tubulointerstitial nephritis, as depicted in figure 1. As renal function had declined after rivaroxaban had been started and no other drugs were altered, rivaroxaban was considered the most likely causative agent. The patient was started on 40 mg prednisone for two weeks followed by a taper schedule of 5 mg per week. The patient continued dialysis for six weeks until renal function improved sufficiently. Eight weeks after presentation to the hospital the eGFR had recovered to 34 ml/min/1.73 m2. 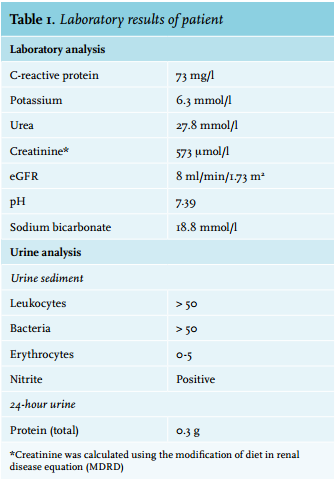 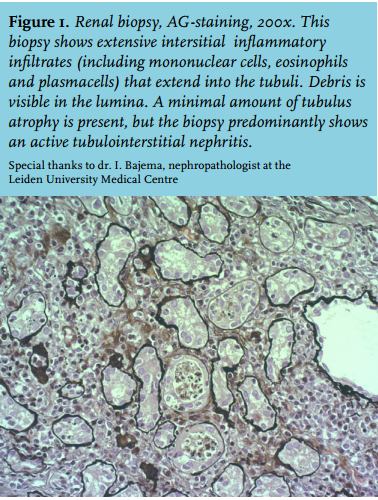 In conclusion, we present a case of biopsy-proven tubulointerstitial nephritis associated with rivaroxaban, which to our knowledge has not been described previously. As DOACs are increasingly being prescribed, this severe side effect might be encountered more often in the future.