A higher risk of developing osteopenia (6.4 fold) and osteoporosis (3.6 fold) has been seen in HIV patients compared with uninfected controls,1 with a prevalence of 52% and 15% respectively.2 Not only the traditional risk factors that are more prevalent among HIV-infected patients, such as low body mass index, smoking, alcohol abuse and glucocorticoid therapy, but also HIV-related risk factors, such as HIV-viral load, nadir CD4+ T-cell count, combination antiretroviral therapy (cART) use and immune activation, contribute to this low bone mineral density (BMD).3-5
However, recently published contradictory data showed that after correction for traditional risk factors, no association with BMD was found in HIV-infected patients, compared with uninfected controls.6
HIV-induced immune activation is thought to promote osteoporosis through activated T cells.7-9 In HIV-infected patients an increased T-cell activation (defined as CD38 and HLA-DR positivity) is seen, even in those suppressed (HIV-RNA viral load < 50 copies/ml) by cART.10 Two studies, however, found no significant relation between activated CD38+HLADR+ T cells or inflammatory markers and BMD in HIV-infected patients.11,12 In these studies not all patients were on cART, making interpretation for the majority of suppressed HIV patients difficult.
Bone remodelling is a continuous coordinated process of osteoclast resorption and osteoblast formation.13 The bone turnover marker c-terminal telopeptide (CTX) can be used to measure bone resorption and procollagen type 1 amino-terminal propeptide (P1NP) for bone formation.14 Here we present a pilot study investigating the relation between BMD and either T-cell activation or bone turnover markers by comparing these in HIV-infected cART-treated male patients above 50 years of age with osteopenia/ osteoporosis (T-score below -1) to those with a normal BMD (T-score above -1).

Patients
HIV-infected patients were recruited from the University Medical Centre Utrecht (UMCU) for participation in the OASIS-HIV study. All patients were previously enrolled in the ‘A Phase 4 Cross-Sectional Study of BMD in HIV-1 Infected Subjects’ study (ID:GS-US-104-0423; ClinicalTrials.gov:NCT01850212), where they underwent dual energy X-ray absorptiometry (DEXA) scanning to quantify bone loss and measure BMD. All patients provided written informed consent in accordance with the Declaration of Helsinki and the local Medical Ethics Committee approved the study.

Study design
The OASIS-HIV study was a cross-sectional single visit study where blood was drawn for further comprehensive in-depth immunological analysis. Data of the previous DEXA scan, performed approximately six months earlier, was used for classification of patients into two groups: osteopenia/osteoporosis (T-score below -1) and normal BMD (T-score above -1). The T-score was measured in the lumbar spine, hip and femoral neck using the DEXA scan. Osteoporosis and osteopenia was classified as a T-score below -2.5 and -1 respectively in one or more locations on the DEXA scan.

Laboratory measurements
Blood samples were obtained by venous puncture, with collection and isolation of plasma and peripheral blood mononuclear cells (PBMCs) performed within four hours at the immunology lab of the UMCU. Plasma was frozen and stored at -80 °C until all the samples were collected. They were then sent to the laboratory of Medicine and Bone Metabolism at the UMC Groningen for analysis of bone markers (CTX and P1NP), as described previously.15 For these markers Z-scores were used, based on more than 350 gender- and age-matched uninfected controls.15 These were volunteers working at the UMC Groningen, the Netherlands. To mathematically calculate net bone formation CTX was subtracted from P1NP. The HIV-RNA viral load was measured (COBAS® AmpliPrep/ COBAS® TaqMan®, Roche Diagnostics, Indianapolis, USA) with a lower limit of detection of 50 copies/ml.

Data analyses
The primary outcome of this study was the relation between BMD (osteoporosis/osteopenia versus normal) and either T-cell activation or bone turnover markers. Secondary outcomes were the association of patient characteristics with BMD. A Mann-Whitney test was used to compare non-paired continuous variables. Data were presented as percentages for categorical variables and as median with interquartile ranges (IQR) for continuous variables. Differences were considered statistically significant when p < 0.05. Linear regression modelling was used to evaluate the relation between BMD and T-cell activation or bone turnover markers and the association with patient characteristics. Analyses were performed using SPSS version 21 (SPSS, Chicago, Illinois, USA). 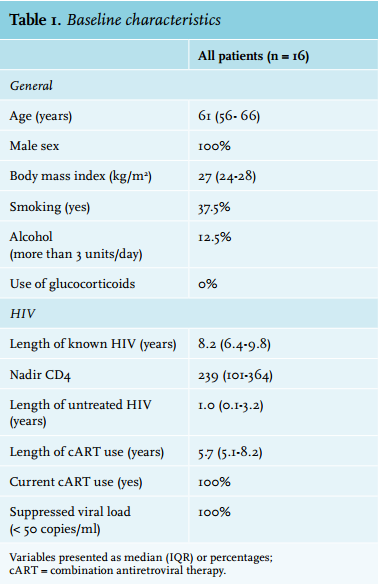 Table 3 not only shows the linear regression results for the lowest T-score, it also shows the association of the above-mentioned variables per DEXA measured region, femoral, lumbar spine and hip respectively. No differences were seen per region or as a whole (table 3). 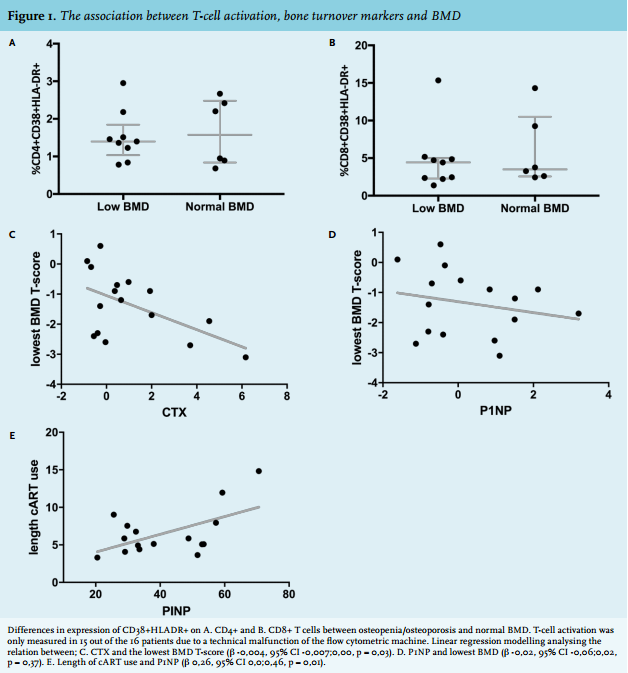 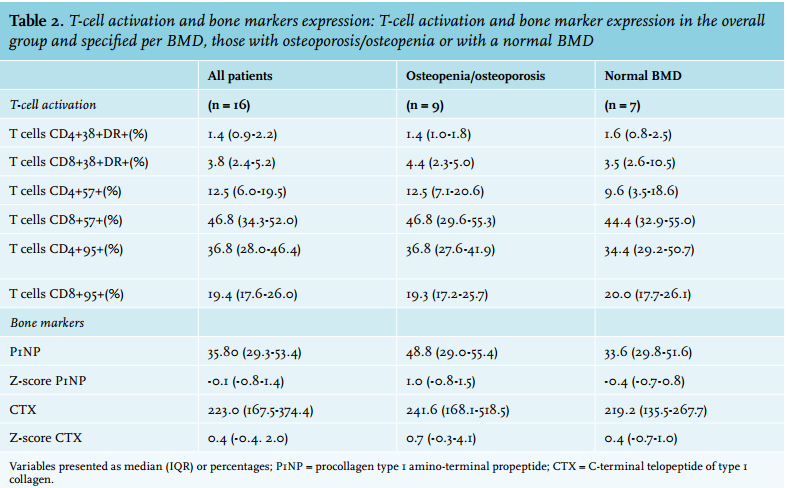 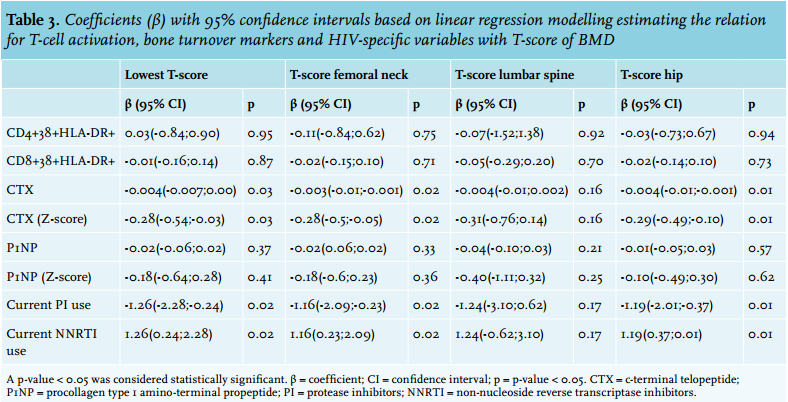 The postulated mechanism of how HIV-induced immune activation promotes osteoporosis is via the replication of the viral protein gp120, which is present on the HIV envelope or possibly through the increased production of receptor activator of nuclear factor kappa-B ligand (RANKL) by activated T cells.7-9 Although suggested in previous publications, our pilot study could not confirm a possible role for activated T cells in the pathogenesis of osteoporosis, as no association was found.16,17 This could possibly be explained by the relatively low level of T-cell activation, 1.4% and 3.8% respectively for CD4+ and CD8+ T cells as found in our study of cART-treated patients with a supressed viral load. Previously published studies showed a more than 2.5 fold higher prevalence for activated CD4+ and CD8+ T cells in similarly cART treated HIV-infected patients with a supressed viral load.10,18,19 Our prevalence is similar to that of HIV-negative patients, which is 1-2.2% and 1-5.1% for CD4+ and CD8+ T cells respectively.10,18
In this study we did, however, find an inverse correlation for the bone turnover marker CTX, a bone resorption marker, and BMD. In untreated HIV-infected patients, higher levels of CTX correlated with advanced HIV disease, which returned to levels of uninfected controls upon initiation of cART.20-22 In addition, increased levels of bone turnover markers predicted BMD decreases in HIV.23 However, CTX has also been shown to increase upon initiation of cART, reaching a stable, but higher plateau compared with cART-naïve patients with high CD4 T cells.24 We also found a correlation for P1NP, a bone formation marker, and BMD. This observation is expected as the bone formation increases due to increased resorption and its subsequent production of growth factors.25 Despite its small sample size, several of our study outcomes strengthen our observation. First, the prevalence of both osteoporosis and osteopenia in our study patients was representative for other published HIV populations.2,26-29 Second, an even distribution of our data was seen upon linear regression, meaning the data were not skewed to an outlier (figure 1). Finally, we also increased our homogeneity by only including male patients over 50 years of age. Therefore, we think that a larger sample size would not influence the conclusions of our study.
The question then remains how to explain the increased prevalence of osteoporosis in HIV, as activated T cells do not seem to influence its pathogenesis. It is well known that HIV-infected patients have higher incidences of classic osteoporosis risk factors, such as alcohol abuse and smoking compared with the general population possibly contributing to this higher prevalence.3,5,30 Furthermore, the increase could be explained by the activation induced at the start of the HIV infection. In a study performed in primary HIV infection, an increased prevalence was already seen in their population with a mean age of 38 years, compared with HIV-negative controls. Thus, possibly alluding to a role for viral load, as a high viral load has been known to correlate to lower BMD.31 Most likely it is a multifactorial problem not caused by just one but several HIV-related components.
Another known component is cART; upon starting cART the BMD is known to decrease.24 In this small pilot an effect of cART on BMD was also seen, with a possible negative effect for protease inhibitors and a possible protective effect for NNRTIs. Previous studies have reported on the possible negative effect of protease inhibitors, especially correlated to time on therapy containing protease inhibitors.28,29 For NNRTIs, negative effects have also been reported, especially in the lumbar spine in patients of an older age with a low body mass index,26,27 contrary to what we have found. Therefore, the effect of NNRTIs on BMD warrants further investigation. In conclusion, this pilot study could not confirm a possible role for activated T cells in the pathogenesis of osteoporosis. However, cART seems to influence BMD, with a possible negative effect for protease inhibitors and a possible protective effect for NNRTIs.

Previously presented as a poster at the Netherlands conference on HIV pathogenesis, epidemiology, prevention and treatment (NCHIV) 2015.
Funding: This study was supported by an unrestricted grant from Will-Pharma (Zwanenburg, the Netherlands). Conflicts of interest: None.