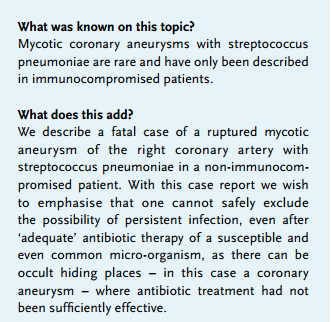 Coronary aneurysms are a rare finding. The incidence ranges from 1.5% in autopsy studies to 4.9% in angiography studies.1,2 The most common cause of coronary aneurysm in adults is atherosclerosis and this is found in about half of the cases. Mycotic coronary aneurysms are a rare cause and the exact incidence is unknown. Other causes include congenital, autoimmune arteritis, emboli and in more recent times iatrogenic causes, such as angioplasty.
The first mycotic coronary aneurysm was described by Morgagni in 1761 and was due to syphilis infection.1 Despite its early historic discovery, up until now only about 150 cases have been published. To our knowledge only two previous studies have reported a coronary mycotic aneurysm with the causative agent being Streptococcus pneumonia. However both cases involved immunocompromised patients.3,4 We report a unique autopsy-proven case of a ruptured mycotic coronary aneurysm due to S. pneumoniae in a non-immunocompromised patient.

A 76-year-old man, with no known cardiovascular history, presented to the emergency ward with a shifting pain of the neck which had started out as chest pain five days previously. In addition fever (39.1 °C), chills, and erythema of the right lower arm and left wrist were noticed. The patient reported a history of an infection of the right ear two weeks before presentation. Physical examination revealed proximal muscle weakness, stiffness and severe neck pain. A neurologist was consulted but considered the symptoms to be unspecific for meningitis and so a lumbar puncture was not performed. Subsequently MRI of the brain and total spine, followed by CT brain revealed right-sided mastoiditis with intact bone structures (figure 1A). Because of persistent neck pain and the fear of meningitis a mastoidectomy was performed. The patient was initially treated with intravenous amoxicillin/clavulanic acid and ciprofloxacin. After admission treatment was switched to clindamycin and ceftriaxone to treat possible meningitis and later to penicillin G when the initial set of blood cultures yielded a penicillinsensitive strain of S. pneumoniae. All subsequent blood cultures collected during antibiotic treatment remained negative. Antibiotics were switched to ciprofloxacin and ceftriaxone after ten days when the patient showed no improvement; despite negative cultures and assumed adequate antibiotic therapy the patient had persistent intermittent fever and elevated CRP, therefore septic emboli were considered. Transthoracic echocardiography (TTE) was performed which showed normal findings. Transoesophageal echocardiogram (TEE) a few days later showed an abnormality in close relationship with the right ventricle at first considered to be an abscess. However, CT of the chest revealed a coronary aneurysm, 2 cm in diameter, of the right coronary artery along with a small amount of pericardial fluid and pleuritic fluid (figure 1B). A pleuritic puncture was performed due to fear of empyema but both gram stain and cultures remained negative. The following night the patient was found with no vital signs. Cardiopulmonary resuscitation was unsuccessful.
Post mortem findings revealed the cause of death to be cardiac tamponade due to rupture of an atherosclerotic aneurysm with a diameter of 3 cm in the right coronary artery. There were no signs of pericarditis or endocarditis. Polymerase chain reaction performed on the formalin-fixed paraffin-embedded tissue of the wall of the aneurysm was positive for S. pneumoniae and on microscopic examination diplococci were found (figure 2A-C). 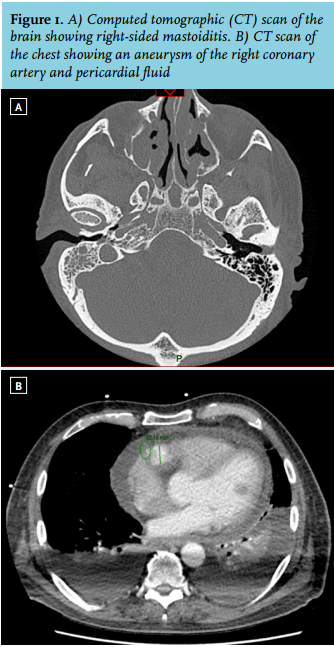 Mycotic coronary aneurysms are caused by bacterial colonisation of the arterial wall. This can be due to systemic circulating bacteria, septic emboli, e.g. as complication of endocarditis, direct invasion of the vessel from an extravascular site of infection and traumatic inoculation of contaminated material, e.g. as a complication of stenting procedures. An abnormal intimal surface, in an atherosclerotic plaque or a pre-existent aneurysm, is likely to be prone to infection by any of these mechanisms. In our case infection of a pre-existent atherosclerotic aneurysm due to systemic circulating bacteria is the most likely mechanism. A possible infection of the right coronary by per continuitatem due to pleural empyema seems unlikely since the cultures performed on the pleuritic fluid seen on CT remained negative. We speculate that the antibiotics probably could not reach the bacteria in the atherosclerotic plaque. This would explain why S. pneumoniae was detected post mortem by PCR and also why diplococci were seen in the wall of the aneurysm despite antibiotic treatment for 16 days. The infection may have resulted in rapid growth and rupture of the aneurysm. This is supported by the larger diameter of the aneurysm on autopsy compared with that found on chest CT. In addition, pericardial fluid was seen on chest CT but not detected on echocardiography (TTE and TEE). The phenomenon of rapid growth and rupture has also been described in other cases.3,5,6
Staphylococcus aureus is the most common culprit in both stent-related and non-stent-related mycotic coronary aneurysms. Several other bacteria have also been described.2,7 Sporadically mycotic aneurysms may be caused by fungi.8 In several cases all cultures remained negative. To our best knowledge a mycotic coronary aneurysm due to pneumococcal infection has only been described twice before.3,4 These cases involved immunocompromised patients, both with a history of lymphoid leukaemia and one with a history of splenectomy as well. The causes of infection in these two cases were pneumonia and arthritis of the right knee, respectively. Both cases presented with chest pain and pericardial fluid on presentation. Our patient did mention experiencing chest pain several days before hospital admission. However, because the chest pain did not relapse and the ECG was normal, the initial clinical focus was mainly on the neck pain and mastoiditis. In retrospect this probably caused a diagnostic delay. Unfortunately there is no gold standard for diagnosing a mycotic coronary aneurysm, and this is reflected in the scarce literature. Repeat anatomical imaging techniques seem to be used most frequently,9,10 since rapid enlargement of the aneurysm seems to be a key characteristic.6 Also molecular imaging is becoming more sensitive but tailored investigations are mandatory to detect small mycotic coronary aneurysms at an early stage. There is no standardised treatment for mycotic coronary aneurysms either. Several authors suggest that small mycotic aneurysms may resolve with antibiotic treatment. Aneurysms of more than 1 or 2 cm may enlarge and can be complicated by rupture, thrombosis or septic embolisation.3,5,6,8 Most patients who underwent treatment for a mycotic coronary aneurysm were treated with coronary bypass grafting and/or aneurysmectomy, in combination with antibiotics. There are a few studies reporting successful treatment by stenting.9,10 However, there is a risk of septic emboli, stent thrombosis and vessel rupture when stenting an infected area and this technique is therefore not recommended by most authors.3,4

We describe an unique case of a patient without a prior history of cardiovascular disease or an immunocompromised state with a fatal ruptured coronary aneurysm of the right coronary artery due to S. pneumoniae bacteraemia. Mycotic coronary aneurysm is rare, even in the age of coronary intervention and stenting, and remains a diagnostic and therapeutic challenge. Mycotic coronary aneurysms can grow rapidly and rupture subsequently, often with fatal consequences. Successful treatment requires timely recognition and intervention involving coronary bypass and resection of the aneurysm, in combination with adequate antibiotic treatment.

The authors declare that there are no funding sources and no conflicts of interest.