Chronic use of metamizole: not so safe after all? 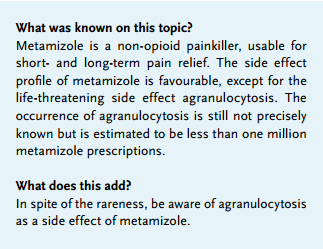 Metamizole (dipyrone) is a compound with analgesic, antipyretic and spasmolytic effects. Metamizole is infamous because of the potential fatal adverse drug reaction, agranulocytosis, with a mortality rate of 23.6%.1 This adverse event was already discovered in 1922.2 Several studies indicated a varying risk of agranulocytosis ranging from less than one per million users within one week to one per 1439 metamizole prescriptions.3 These differences in agranulocytosis risk attributable to metamizole have led to different policies worldwide with regard to the use of metamizole.4 In some countries metamizole was withdrawn from the market, in other countries it is still available on prescription or as an over-the-counter medication.1 The Dutch Association of Anaesthesiology propagated the use of metamizole in their revised postoperative pain guideline in 2012.5 Also the number of side effects has been increasing since 2011.6 Our case demonstrates that the use of metamizole can cause leukopenia resulting in a severe infection.

A 68-year-old Spanish patient, visiting the Netherlands, was admitted to the hospital because of acute onset of diarrhoea. In his previous history he suffered from diverticulitis, critical ischaemia of both legs due to lower extremity peripheral artery disease, atrial fibrillation and deep venous thrombosis. He used the following medications: acenocoumarol, furosemide, pantoprazole, metamizole and foster.
The patient suffered from dyspnoea and general malaise a few days before admission. The day before admission he had eaten a pizza and since then he had watery stools 14 times daily without blood or mucus. He did not notice any fever at home. His appetite had decreased but he did not complain of abdominal pain or nausea. His travel history was unremarkable other than the Netherlands and Spain. Physical examination showed a blood pressure of 130/66 mmHg, pulse rate of 80/min, a respiratory rate of 25/min and a temperature of 39.1 °C. Further physical examination showed no abnormalities.
At admission, the following laboratory findings were observed: haemoglobin 10.2 mmol/l; thrombocyte count 196 x 109/l; leukocyte count: 0.3 x 109/l with 0.1 x 109/l neutrophils and no other abnormalities in the white cell differential; urea 5.4 mmol/l; creatinine 75 μmmol/l; eGFR > 60 ml/min and CRP of 264 mg/l. Chest X-ray and abdominal CT revealed infiltrate in the left lower lobe of the lung and some diverticulosis without signs suggestive of inflammation. Intravenous broad-spectrum antibiotics were administered for ten days. Repeated blood, faecal, sputum, and urine cultures showed no abnormalities.
Striking was the neutropenia, while the patient had no history of immunocompromising disease which could explain the neutropenia/leukopenia. We performed a bone marrow biopsy, which showed reduced myelopoiesis, suggestive of a reactive process. Malignancy was excluded. Because of the isolated neutropenia /leukopenia and no thrombocytopenia and/or anaemia, the cause of the leukopenia was probably toxic or due to medication. He had used metamizole for four years because of a painful hip and knee, 1000 mg twice daily. There was no other history of over-the-counter medication. We stopped the metamizole during admission. Three days after stopping the metamizole, the leukocyte count normalised. In retrospect, the symptoms in this immunocompromised patient could be explained by atypical pneumonia with diarrhoea. Microorganisms causing pneumonia with diarrhoea as a symptom are for instance Legionella pneumophila, chlamydia pneumonia or C. pneumoniae. 7 Unfortunately, in this case we could not find the microorganism.
We concluded that this patient had leukopenia/neutropenia as a result of the use of metamizole with an atypical pneumonia as a complication of the agranulocytosis. In the following seven days his dyspnoea decreased and his stool pattern normalised. His fever resolved with administration of broad-spectrum antibiotics but only after the neutrophil count had normalised. Patient was discharged from the hospital two weeks after admission.


CONSIDERATION
Our case demonstrates a rare adverse event, agranulocytosis, after the use of metamizole. The causality between agranulocytosis and metamizole in this case can be classified as probable. This is because a positive dechallenge reaction was observed on drug withdrawal and the agranulocytosis was unlikely to be attributed to other causes.4
Remarkable is that the patient had already been using metamizole for four years, without any episodes of severe infection. However, agranulocytosis caused by metamizole is a hypersensitivity reaction. Exposure over a long period of time with high doses increases the probability for sensitisation and later development of metamizole-related agranulocytosis.8
After stopping the metamizole, the patient’s leukocyte count normalised within three days. This seems a rather quick recovery, yet not unusual for metamizole-induced agranulocytosis. The white blood cell (WBC) count is able to respond as early as 48 hours after cessation of metamizole, though more commonly the WBC will normalise within one week. Normalisation of the WBC can take as long as one month.9
In 2012 the Dutch Association of Anaesthesiology published a revised guideline on postoperative pain. They state metamizole is an effective analgesic with less side effects than classic nonsteroidal anti-inflammatory drugs (NSAIDs). They recommend the use of metamizole as an alternative for patients with a contraindication for the classic NSAID.5 According to the Drug Information System of National Health Care Institute (GIP database) 18 patients used metamizole in the Netherlands in 2014, four more than in 2013.10 Since 2011, the Netherlands Pharmacovigilance Centre Lareb has reported 16 side effects of metamizole, of which three patients with neutropenia, two with leukopenia and two with thrombocytopenia. In the period from 1996 to 2010, only one notification was made of a side effect (unclear which side effect) in Lareb.6
Metamizole is classified as a drug NSAID, due to the (poor) anti-inflammatory effect.11 In the analgesic ladder from the World Health Organisation, metamizole is classified in class 1 as monotherapy, as are the classical NSAIDs. In addition, metamizole can also be used as combination therapy in class 2 (weak opiates) or in class 3 (strong opiates).12
Metamizole is a prodrug and is hydrolysed and absorbed in the stomach to its main metabolite 4-N-Methylaminoantipyrin (MAA). MAA will be converted to a variety of metabolites.
Although the mechanism of action of metamizole has been examined, as yet it is not completely understood. On one hand, it seems that the peripheral antinociceptive effect of metamizole is caused by an inhibition of cyclooxygenase (COX) whereby COX 2 is more inhibited than COX 1. On the other hand, the analgesic effect of metamizole is associated with a less anti-inflammatory effect in comparison with NSAIDs. This suggests that the antinociceptive effect is in part regulated by central mechanisms.2 The antipyretic effect of metamizole is purely based on a central COX-dependent effect.12
The most important adverse event of metamizole is agranulocytosis. Agranulocytosis is characterised by a neutrophil granulocyte count below 0.5 x 109 cells/l and normal counts in other blood cell types.4
Regarding the pathophysiology, two types of agranulocytosis are described: an immune reaction and a toxic reaction. In immune-mediated agranulocytosis the drug, or a metabolite of the drug, binds irreversibly to the neutrophil membrane. In doing so, T cells or antibodies are produced which induce lysis of the cell.9,13 In the toxic reaction, the drug directly damages the myeloid precursor cells.13
Metamizole induces agranulocytosis via an immune reaction. The degradation of metamizole eventually results in an antibody reaction.9,13

The authors declare no conflicts of interests. No funding or financial support was received.