Actinomycosis of the abdominal wall after cholecystectomy: transferral theory 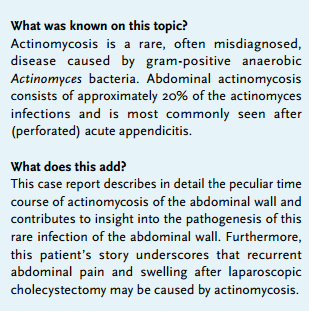 A 59-year-old female was seen at our outpatient department with abdominal swelling and pain. Four months prior to this she underwent an elective laparoscopic cholecystectomy because of symptomatic cholecystolithiasis. A few weeks after the cholecystectomy she developed tenderness in the left lower abdominal quadrant which was followed by swelling and fever. The C-reactive protein (CRP) was elevated and urinalysis indicated a urinary tract infection. This was suspected to be pyelonephritis according to the general practitioner, who began treating her with amoxicillin-clavulanic acid (500/125 mg three times a day). Eight days later, the fever had subsided but the painful swelling in her left lower abdominal quadrant persisted.
On the same day she was referred to the gastroenterologist who confirmed the presence of a firm tender palpable swelling of approximately 10 cm in diameter in the left lower abdominal quadrant. Laboratory investigation showed that there was still inflammation (erythrocyte sedimentation rate: 120 mm, CRP: 168 mg/l, leukocytes: 15.2 x 109/l). Abdominal computer tomography (CT) showed thickening of the wall of the transverse colon (figure 1A) and distal descending colon wall with infiltration extending through the muscles into the subcutaneous fat (figure 1B). Thickening of some small intestinal loops was also observed, with some slightly enlarged pre-aortic lymph nodes (up to 12 mm; not shown). However, no abscess was detected. In addition, the patient had an intrauterine contraceptive device (IUD) in place. Sigmoidoscopic examination until the transverse colon, performed five days later, did not reveal any abnormalities. The clinical improvement and normal sigmoidoscopy were interpreted as signs of a favourable therapeutic response to the antibiotic treatment, and it was decided that it would be beneficial to follow the response after discontinuation of antibiotics. Repeated CT scanning three weeks later showed improvement with regards to the intra-abdominal abnormalities with some remaining infiltration of the descending and sigmoid colon, as well as the adjacent peritoneal fat and the abdominal wall (figure 1C).
During the following months the pain and swelling did not resolve completely and an additional course of antibiotics, which was given for suspected diverticulitis, gave some temporary improvement. Six months after the first course of treatment she again suffered from increased abdominal pain and enlargement of the swelling (figure 2A). The CRP was 11 mg/l, but further laboratory results were all normal. CT scanning showed that the intra-abdominal abnormalities had all disappeared, but that the infiltration of the abdominal wall had significantly increased and was now completely located superficial to the oblique abdominal muscles (figure 2B).
Histology of a needle biopsy of the lesion showed multiple Actinomyces microcolonies surrounded by numerous neutrophilic granulocytes (figure 2C/D). Furthermore, the bacterial culture was negative. Oral treatment with pheneticillin was then administered. After two weeks the patient had recovered, the swelling had significantly decreased to approximately 5 cm in diameter, and the plasma CRP value had normalised. Antibiotic therapy was continued for four months. In this period no relapse occurred and the swelling gradually disappeared. At present, one year after the event, there are no signs of relapse. 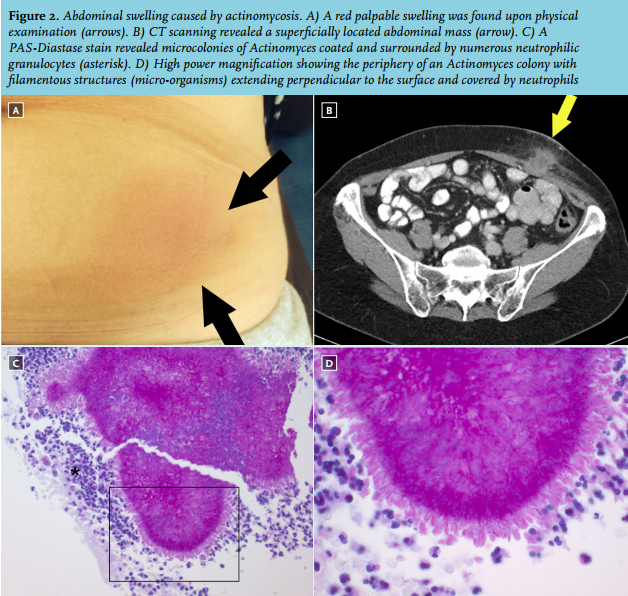 This case describes a peculiar series of events with regards to intra-abdominal actinomycosis, in which the intra-abdominal lesions gradually migrated to the exterior layers of the abdominal wall. Actinomycosis is a rare infection caused by Gram-positive anaerobic bacteria from the Actinomycetaceae family, although its name suggests a fungal infection.1 Members of this family are typical commensals of the human urogenital and gastrointestinal tract.2 The incidence of actinomycosis has not been systematically investigated. It may occur at several anatomical sites (including the central nervous system, bone and muscle tissue) with a predilection for the orocervicofacial region. The latter contributes to half of the Actinomyces infections.3 Abdominopelvic and thoracic locations contribute to 20%3 and 15-20%3,4 of all infections, respectively. Abdominopelvic actinomycosis is usually a sequela of intra-abdominal infection with intestinal perforation such as (perforated) appendicitis.1,5,6 Less frequently it is associated with either neoplasia or foreign bodies in the gastrointestinal or urogenital tract.7,8 Notably, several reports mentioned an association between the use of IUDs and abdominopelvic Actinomyces infection,2,8-12 including a few reports indicating involvement with the abdominal wall.13-18
The presented case is remarkable because the initial site of infection seemed to be in the extra-intestinal exterior of the colon and small intestines that would gradually migrate to the abdominal wall. The resolution of the intra-abdominal infection may reflect a positive response to the two short courses of antibiotics.
An intra-intestinal focus was not confirmed despite the suggestion of colon involvement in the initial CT scan. Intra-abdominopelvic actinomycosis has been attributed to previous surgery, especially laparoscopic cholecystectomy with gallstone spillage.19-21Actinomyces species have either been isolated from subphrenic22 or intra-abdominal abscesses following complicated laparoscopic cholecystectomy,19-21 but this effect has mostly been present in co-infections by other bacterial species (e.g. Klebsiella pneumoniae or Escherichia coli). Actinomyces bacteria have a low growth rate and symptomatic infections may be present many years after laparoscopic cholecystectomy.20,21
In this case, there was some spillage of bile which was immediately removed. Spillage of biliary stones did not occur. The gallbladder was removed through the sub-umbilical insertion of the laparoscope, but the infection was located in the left abdominal quadrant. We suspect that Actinomyces bacteria or endospores were inoculated during the intra-abdominal manipulation of the lacerated gallbladder before removal, and that this caused infection between the colon and abdominal wall. Primary inoculation at the sub-umbilical insertion site, or primary inoculation at a skin abrasion by spillage after evacuation from the abdominal cavity are less likely. Of note, pathological examination revealed several small, yellow granular-shaped concrements within the gallbladder and cystic duct (up to 3 mm in diameter) but microscopic examination did not reveal significant inflammation and/or colonisation by Actinomyces. Four months after surgery the intra-abdominal infection developed without abscess formation, and responded well to a short course of antibiotic treatment. Eleven months post-surgery the infection in the abdominal wall persisted. This remarkable course of the initial intra-abdominal Actinomyces infection suggests that Actinomyces bacteria have a preference for multiplying in the abdominal wall. The decisive characteristics which facilitate growth in the abdominal wall and arrested growth at the intra-abdominal site are not clear. Since there was no sign of endometritis or pelvic inflammatory disease, the IUD as a source of infection was considered less probable. Therefore, we consider the lacerated gallbladder as the most likely source. However, as it was previously shown that a substantial proportion of IUDs are contaminated with Actinomyces israelii, 23 we could not completely exclude the IUD as a source of infection. The gynaecologist proceeded to remove the IUD.
Due to its rarity, its nonspecific clinical symptoms, its non-specific radiological findings and often lacking microbiological confirmation, abdominal actinomycosis is a challenging diagnosis. Nevertheless, unexplained recurrent abdominal swellings in patients who undergo a laparoscopic cholecystectomy (even after many years) that do not respond to short-term antibiotic treatment should raise suspicion of actinomycosis.
In line with previous literature,1 we propose to confirm the putative diagnosis with a combination of biopsy and fluid aspiration for histological and microbiological examination, keeping in mind its limited sensitivity and specificity.1,24,25
Patients with Actinomyces infection should be treated with prolonged antibiotic treatment and abscesses should be drained when possible.

We would like to thank our patient for granting informed consent to publish this clinical case. Anonymity and confidentiality was assured at all times. Furthermore, we would like to thank P. Robinson for critically reviewing the manuscript regarding English grammar and spelling.