Patients on the general wards regularly need a central venous catheter (CVC) for the administration of intravenous feeds or medications, especially if a peripherally inserted central catheter is not feasible or for the purpose of haemodialysis.
Most CVCs, however, are introduced in the intensive care unit (ICU) or emergency department and it was estimated that in the UK 200,000 CVCs were inserted annually.1 For introduction of a CVC for patients on the general ward in our hospital, the patient has to be transported to a specialised unit or room and that will be the case in most other hospitals. If patients from the general ward are in need of a CVC, the use of ultrasound during and after insertion could be of great value. Using ultrasound during insertion will help in getting the CVC into the correct vessel, and because ultrasound can also be done immediately after insertion there will be no need to do a chest X-ray (CXR). This strategy might also be safe and time efficient for the general ward patients in need of a CVC.
It has been shown that the use of ultrasound during the insertion of a CVC in the internal jugular vein results in fewer complications and fewer attempts are necessary for correct placement compared with the landmark technique.2 Many guidelines and expert opinions prescribe the use of ultrasound guidance during insertion of a CVC into the internal jugular and subclavian vein.1,3-5
By using the Seldinger technique, a guide wire is introduced after puncture of the vessel under direct ultrasound guidance. Afterwards, the position of the wire is checked by ultrasound, further reducing the problem of misplacement.6 After introduction of a CVC, the position is checked by CXR, acknowledging that a pneumothorax or malposition may be missed through this investigation. Furthermore, there is little consensus on what the best position is on a chest radiograph;7 there are conflicting reports on the use of ultrasound for this question.8,9
Ultrasound has advantages compared with CXR.10,11 It has been shown to be superior to CXR in the identification of an anterior pneumothorax and can be performed immediately after the procedure, while waiting for a CXR takes time and is associated with discomfort and the need of radiation exposure for the patient. Furthermore, the immediate appearance of microbubbles in the right atrium after injection of agitated saline through the CVC proves unequivocally the intravascular position of the CVC.
We performed a proof of concept prospective study in which we compared ultrasound versus CXR in general ward patients receiving a CVC in the internal jugular or subclavian vein for the detection of post-insertion complications and to confirm the correct position of the CVC. Ultrasound was used as guidance during insertion. We also studied the time interval between the procedure itself and the results of the CXR.

We conducted this study in a large teaching hospital in the Netherlands. General ward patients in need of a CVC were included. We excluded patients < 18 years and pregnant women. The study protocol was approved by the Local Ethics Committee and consent was obtained directly. Sex, age, body mass index, approach used for CVC placement, reason for CVC placement (antibiotics, total parental nutrition, lack of other venous access, combination of reasons) and the time (minutes) needed to obtain the result of a bedside CXR were noted.
Complications during insertion were noted separately (e.g. bleeding or rhythm disturbance).
All CVCs were placed under direct ultrasound guidance by experienced doctors (staff and residents). Due to logistic reasons general ward patients were transported to the ICU for insertion of the CVC during this study.
All CVCs were inserted using the Seldinger technique. After puncture of the vessel the position of the guide wire was checked by ultrasound in the long axis. In our departments triple lumen CVCs (Edwards Lifesciences) are used. For the left-sided CVCs a catheter of 20 cm is used, on the right side 15 cm. For dialysis purposes Medcomp catheters are used, also in two different lengths (20 and 15 cm).
After insertion, while waiting for the CXR, the following ultrasound examinations were performed by MB and FB, both experienced in the use of ultrasound:

Incorrect CVC position was defined as: 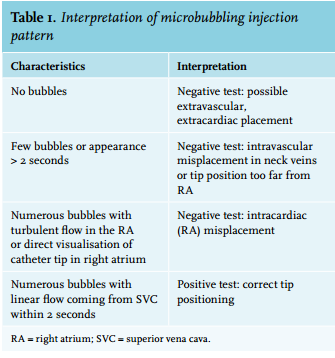 Calculation
Continuous data are presented as mean ± standard deviation (SD) or median and interquartile range (IQR) as appropriate. Categorical data are presented as frequencies and percentages. Using CXR as a reference standard, the sensitivity of ultrasound with a 95% confidence interval was calculated. Statistical analysis was performed using IBM SPSS Statistics (version 21).

Between January 2015 and September 2015, 53 patients were included (table 2). In this study 25 (47%) patients were male, aged 64 (± 12.8), with a body mass index (BMI) of 26.7 (± 5.2).
Other characteristics such as the reason for CVC insertion, the approach used (jugular or subclavian), whether the CVC was inserted by staff or a resident and the time needed for CVC insertion are also described in table 2.
In all but one patient ultrasound was feasible. In one patient no cardiac view could be obtained. In one patient ultrasound revealed a correct position but the CXR showed an aberrant location of the catheter. In this patient the attending radiologist advised an iodine contrast cavogram which showed an anatomical anomaly of the superior vena cava. Therefore this CVC was correctly positioned in the superior vena cava. In one patient a catheter introduced in the internal jugular vein ended in the ipsilateral subclavian vein (also a large vessel). In this patient ultrasound showed a correct position, including normal pattern of microbubbles in the right atrium.
In one patient ultrasound showed a correct position but the radiologist concluded that the CVC was in the right atrium (table 3).
The sensitivity of the use of ultrasound in detecting that the CVC is correctly positioned (with CXR as a reference standard) was 98% (89.4-100%). The time needed for CVC placement was 17 ± 8.6 minutes (mean ± SD). The median time needed to wait for the result of the CXR was 24.5 minutes (IQR 18.1- 45.3). We omitted one patient who was included in the study when the digital radiology system was down for 44 hours due to severe technical failure.
In this study no post-procedural complications after CVC insertion were detected by either ultrasound and CXR. 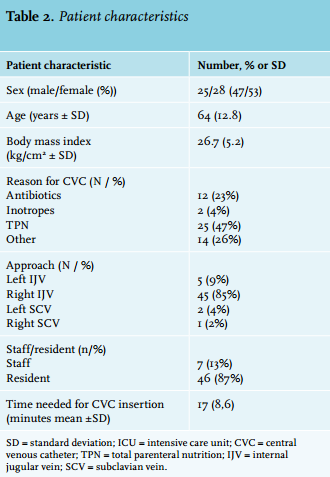 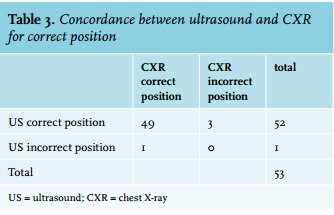 Our proof of concept study shows that an integral use of ultrasound during and after CVC insertion is effective in establishing correct CVC positioning and post-procedural complications in patients from the general ward when compared with CXR. Our study demonstrates that CXR is only necessary if lung sliding cannot be demonstrated or if there is not a rapid (< 2 sec) appearance of microbubbles in the right atrium. To further investigate the occurrence of infrequently occurring complications, we suggest that a larger study should be performed.