A lethal case of the dapsone hypersensitivity syndrome involving the myocardium

In the Netherlands, dapsone (4,4’-diaminodiphenylsulfone) is used for the treatment of dermatitis herpetiformis, leprosy and Pneumocystis jiroveci pneumonia and prophylaxis in case of cotrimoxazole allergy. Dapsone has both antibiotic and anti-inflammatory effects. Common side effects of dapsone are dose-related methaemoglobinaemia and haemolytic anaemia.1 Moreover, an idiosyncratic drug reaction, known as the dapsone hypersensitivity syndrome (DHS), appears in about 0.5-3.6% of persons treated with dapsone,2 ranging from mild cutaneous symptoms to severe life-threatening organ failure.3 The diagnosis of DHS requires at least two of the following: fever, lymphadenopathy, generalised rash and hepatitis.2 DHS usually occurs four to six weeks after the start of intake of dapsone.4 The mortality of DHS is approximately 9.9%.2 A genome-wide association study found an association between HLA-B*13:01 and the development of DHS (OR 20.53).4
We present a 35-year-old woman with leprosy, who developed severe DHS. At first, she recovered and left the hospital in a good condition. Nonetheless, she died six weeks later from fulminant myocarditis, 11 weeks after the first DHS symptoms appeared.

A 35-year-old female from Thailand was diagnosed with leprosy and treated with multidrug therapy (dapsone 100 mg/day, clofazimine 50 mg/day and rifampicin 600 mg monthly) after excluding G6PD deficiency. She was not using any other medications.
Seven weeks after starting therapy she was admitted via the emergency ward for epigastric and skin pain, vomiting, myalgia and dark coloured urine. Body temperature was 38 °C, blood pressure 104/51 mmHg and heart rate 94 beats/min. On admission she rapidly developed a livid papular skin rash, icteric sclerae and generalised lymphadenopathy (figure 1). Dapsone and rifampicin were stopped immediately. Laboratory findings showed, among other things, COOMBS-negative haemolytic anaemia and aberrant serum liver tests compatible with fulminant hepatitis, prolonged prothrombin time, and a low albumin. There was no eosinophilia.
Serological tests for hepatitis A, B, C and E and tests for Epstein-Barr virus, cytomegalovirus, herpes-simplex virus, human immunodeficiency virus, lues, the antistreptolysin titre, blood cultures, repeated ANA, ANCA and anti-double stranded DNA were negative, making an autoimmune disease such as systemic lupus erythematosus unlikely. The diagnosis of DHS was made and HLA-typing disclosed HLA-B*13:01 positivity in our patient. Initially, prednisolone 60 mg/day was started,5 but due to her clinical deterioration this was increased to 1000 mg/day, with good response. After three days the prednisolone was lowered to 100 mg/day, and gradually diminished to 60 mg/day five weeks later, when she was discharged. Besides the prednisolone our patient was only using insulin at discharge. In the outpatient clinic she showed further improvement.
Six weeks after discharge, with a current prednisone use of 45 mg/ day, she suddenly became nauseous. The next morning she developed dyspnoea and lost consciousness. Despite CPR she died on arrival to the hospital. During her initial admission no electrocardiograms were taken because there were no signs of cardiac disease.
Autopsy showed signs of acute bilateral cardiac decompensation. The heart was moderately dilated. The staining of a biventricular slice for lactate dehydrogenase showed a mottled pattern of necrosis, suggestive of myocarditis (figure 2). Microscopy showed massive biventricular myocarditis with extensive myocyte necrosis. The inflammatory infiltrate consisted of lymphocytes, macrophages and large numbers of eosinophilic granulocytes admixed with several multinucleated giant cells of the Langerhans type (CD68+, HHF 35-). No granuloma formation was seen (figure 3). These findings were compatible with severe myocarditis (see discussion) and did not fit other infectious causes of her death. Leprosy could not be confirmed during autopsy. 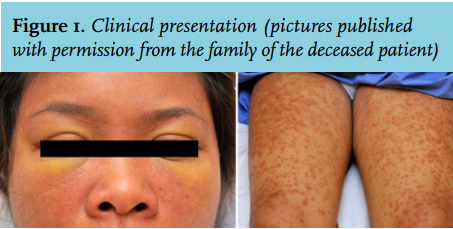 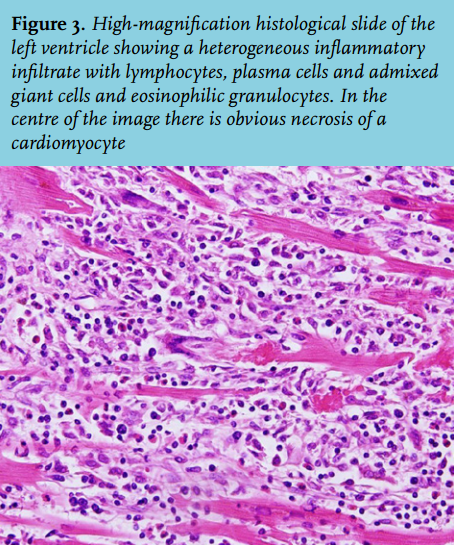 Here we describe an HLA-B*13:01 positive patient who most likely died of DHS-related eosinophilic myocarditis after apparent recovery. Although discontinued 11 weeks before her death, dapsone is known to cause eosinophilia and eosinophilic myocarditis.2,6,7
Zhang et al. reported a strong association of HLA-B*13:01 with DHS (OR 20.5).4 With a sensitivity of 85.5% and a specificity of 85.7%, HLA-B*13:01 is a powerful predictor for DHS.4 The association between DHS and HLA-B*13:01 was published during the admission of our patient. These findings, together with the common finding of lymphadenopathy, suggest a central role for dysregulated hyper-activated T cells in the pathogenesis of DHS.
Discontinuation of the offensive drug is the most crucial action in a patient with dapsone hypersensitivity syndrome.5 If required, supportive therapy and glucocorticoids, at a dose of 1 mg/kg body weight, is recommended.5 However, this treatment schedule did not decrease the symptoms in our patient nor did it improve the laboratory tests. Therefore, high-dose intravenous prednisone (1000 mg) treatment was given for three days, followed by high-dose oral prednisone, a treatment algorithm that is commonly used for patients with a major flare of systemic autoimmune disease. Then our patient gradually recovered and could be discharged from hospital, five weeks after her admission. Her sudden death, six weeks later, was in this sense unexpected. Although DHS myocarditis has been previously reported,2,6 to our knowledge, no reports have been published on sudden death due to myocarditis in a patient with apparent improvement of DHS. We would suggest to take an echocardiogram when the diagnosis of dapsone hypersensitivity syndrome is suspected. Although clinical signs may be absent, echocardiogram might show signs which can also be used for follow-up.
Myocarditis can be subdivided into several histopathological entities, depending on the clinical course or the constitution of the inflammatory infiltrate. In this patient, the inflammatory infiltrate showed numerous eosinophilic granulocytes and presence of giant cells of the Langhans type, prompting a diagnosis of either hypersensitivity/eosinophilic or giant cell myocarditis.
Hypersensitivity/eosinophilic myocarditis is characterised by tissue eosinophilia in response to an allergen, typically medication.8 Although often asymptomatic, a specific subset (necrotising eosinophilic myocarditis) may follow a fulminant course and progression to sudden unexpected death.9 Necrotising eosinophilic myocarditis is histologically characterised by a diffuse inflammatory infiltrate with predominant eosinophils, extensive necrosis of the myocardium and sometimes giant cells, as was the case in our patient.
Different drugs have been connected with eosinophilic myocarditis, including sulphonamides.7 We found no reports for rifampicin, clofazimine or prednisolone (used by our patient) as offensive drugs in relation to eosinophilic myocarditis. Prednisolone is used as effective therapeutic modality for eosinophilic myocarditis.10 Eosinophilic myocarditis is also found in patients who do not use any medication.9
The diagnosis of leprosy is made mainly on clinical grounds. In our patient it was based on the presence of anaesthetic skin lesions, thickening of peripheral nerves and acid-fast bacilli in slit-skin smears. However, correct measurement of peripheral nerve thickness is hard and the quality of skin smears is often poor.11 Ziehl-Neelsen staining has high specificity and low sensitivity.12 Antimycobacterial therapy can affect the outcome of Ziehl-Neelsen staining. The acid-fast bacilli became phagocytised by the macrophages and fragments of the bacilli are left in the lesions, which cannot be identified by a Ziehl-Neelsen stain.12 This possibly accounted for the unconfirmed diagnosis of leprosy during autopsy.
In the study by Zhang et al. the absence of HLA-B*13:01 was associated with a reduction in the risk of developing DHS from 1.4 to 0.2%.4 In the Netherlands testing for HLA-B*13:01 costs € 125.10. Since HLA-B13*01 is mostly present in Chinese, Japanese, Indians and Southeast Asian patients we suggest to test high-risk groups for both G6PD deficiency and HLA-B*13:01 before starting dapsone to prevent the potentially life-threatening condition of DHS.4