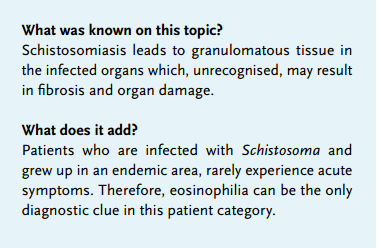 Recognizing an infection with Schistosoma is important to prevent severe complications. Patients from endemic areas with schistosomiasis are often asymptomatic with blood eosinophilia being the only diagnostic clue, as illustrated in the following case.

A 30-year-old male from Eritrea was referred to the University Medical Center Groningen because of a cavitary lesion in the left lower lobe, diagnosed on routine X-ray following immigration. His medical history was unremarkable. He had never been diagnosed with tuberculosis. Our patient had been coughing for several weeks, which was occasionally accompanied by haemoptysis. He had been experiencing fatigue, fever and weight loss. Laboratory results showed normocytic anaemia (haemoglobin 7.8 mmol/l, mean cell volume 87 fl), leukocytosis (leucocytes 12.3 x 109/l) with increased neutrophils (7.31 x 109/l) and eosinophils (1.14 x 109/l), and an increased C-reactive protein (68 mg/l). Laboratory tests including liver and kidney tests were in the normal range. A computed tomography scan of the chest confirmed a large cavitary lesion in the lateral region of the left lower lobe with a horizontal air-fluid level indicating either an abscess or empyema (figure 1). The fluid was aspirated by thoracocentesis. Hemophilus influenza was cultured from the pleural fluid as well as the collected sputum. Tuberculosis, echinococcosis and strongyloidiasis were ruled out (with repetitive negative sputum cultures, polymerase chain reaction and Ziehl-Neelsen staining and with negative serology, respectively). Under the working diagnosis of a bacterial pulmonary abscess caused by Hemophilus influenzae our patient was treated with amoxicillin 500 mg x 4/day. The eosinphilia was explained at that time by an asymptomatic infection with Giardia lamblia isolated from the faeces, which was left untreated. During the next five months of adequate antibiotic treatment, our patient clinically improved and inflammatory parameters normalised; however, there was no radiological improvement. Therefore, left lower lobe lobectomy was performed (figure 2). Tissue culture showed Hemophilus influenzae resistant to amoxicillin.
Unexpectedly, histology of the lung revealed a worm (figure 3a) and an egg with a lateral spine (figure 3b), compatible with the parasite Schistosoma mansoni. The surrounding tissue showed granulomas with fibrosing inflammation. The diagnosis of schistosomiasis was confirmed with serology performed on serum at the time of presentation (Schistosoma worm antigen IgM 1:128 and IgG 1:64). Additional analysis, using a formalin-glycerine sedimentation method, also showed Schistosoma mansoni eggs in the faeces. Praziquantel 40 mg/kg/bodyweight/day was prescribed for one day. Our patient had an uneventful recovery from surgery and has been well during eight months of follow-up.

Schistosomiasis should be considered in all patients with an unexplained eosinophilia who originate from, or have travelled to, an endemic area for schistosomiasis. Schistosomiasis is endemic in most parts of Africa, where the prevalence can exceed 50% in some local communities.1-2 When exposed to contaminated water, individuals become infected by skin penetration with the larvae (cercariae) of the Schistosoma worm. The cercariae enter the venous circulation and migrate first to the lungs and then to the liver, where they reside during the early stages of infection.1-2 During this acute phase, a febrile illness (Katayama fever) and pulmonary symptoms such as coughing, wheezing and shortness of breath may occur. The acute phase with pulmonary symptoms typically occurs 3-8 weeks after the initial infection.1-2 Imaging at this stage often reveals transient nodular lesions.3-4
However, as illustrated in the above case, patients who grow up in an endemic area rarely experience acute symptoms. Therefore, the acute phase of the disease often passes unnoticed in this patient category. Katayama fever mostly occurs in returning travellers who were exposed to a high worm burden and have little or no immunity against schistosomes. After the acute phase, the larvae mature to adult worms and descend through the venous system to their final habitat. Dependent on the type of Schistosoma, the worms usually settle in either the venous plexus of the bowel (S. mansoni, S. japonicum) or the urinary bladder (S. haematobium) and begin to lay eggs, which may occasionally be ectopically deposited throughout the body.1,2 The chronic phase of infection can last for several years wherein patients may not experience any symptoms. Due to the presence of eggs in organs, local inflammation and formation of granulomas occur, leading to fibrosis. In the case of S. mansoni, portosystemic shunting may also allow eggs to pass directly to the lungs.5,6 As in our patient, pulmonary infiltration results in pulmonary fibrosis. Roughly 5-10% of patients who are chronically infected develop pulmonary arterial hypertension which ultimately leads to right heart failure.5,6 Other complications of intestinal schistosomiasis are polyposis of the colon, colon carcinoma and portal hypertension due to liver fibrosis. Complications of bladder schistosomiasis include recurrent urinary tract infections and bladder cancer. Cerebral schistosomiasis occurs in roughly 5% of infected patients and can be due to an infection with S. Japonicum as well as with S. mansoni. Because of these severe complications, recognising an infection with Schistosoma is important.7 Therefore, any patient originating from, or travelling from an endemic area, who is found to have eosinophilia should be investigated for schistosomiasis.

There are no conflicts of interests.