Behçet’s disease, hospital-based prevalence and manifestations in the Rotterdam area

Behçet’s disease, first described by Hulusi Behçet in 1937, is an idiopathic systemic vasculitis with variable clinical manifestations.1 The diagnosis of Behçet’s disease is based on clinical criteria with the presence of recurrent oral ulceration together with genital ulcers, ocular inflammation and skin lesions.2 Less often arthritis, central nervous system and gastrointestinal tract inflammation is present.3-5 The aetiology still needs to be unravelled. The inflammatory symptoms are considered to be caused by an excessive T-cell mediated inflammatory response, triggered by an environmental antigen in a genetically susceptible host.3,6,7 Over the years several genetic associations with Behçet’s disease have been identified.8-14 Furthermore, a positive family history can be found in 12% of non-Caucasian patients and a sibling risk ratio of 11-52 in Turkish patients.
Behçet’s disease typically occurs in countries along the former Silk Road, an ancient route of commerce between the Mediterranean (Spain and Portugal) and the Far East (China). The highest prevalences of Behçet’s disease are seen in Turkey (20-420 per 100,000, with about 70 per 100,000 in its European region). In Asian countries, such as Japan, Korea, China, Iran, and Saudi Arabia, prevalence varies from 13.5 to 20 cases per 100,000. In Western countries prevalences of approximately 1 per 100,000 have been reported.5,15,16 Morbidity is reported to be lower in Western populations, in comparison with Eastern Mediterranean and Middle and Far Eastern countries.3,15,16 Behçet’s disease can develop at any age, but the disease appears most frequently between the second and fourth decade of life.17 In countries along the former Silk Road, Behçet’s disease is more frequent among men, whereas in Western countries it is more prevalent in women.17-22 Demographic and morbidity data of Behçet’s disease in Northern Europe and the Netherlands are sparse. Demographic data from other Northern European countries are restricted to two cohorts, one German and one British.23,24 It has been suggested that lifestyle or environmental factors could be influential in the immuno-aetiology of Behçet’s disease, hence influencing the prevalence in patients migrating to other countries.20,25 In this light, countries to which patients from high incidence countries migrate, such as the Netherlands, can be helpful to address this issue.
Therefore, we initiated a demographic study in Dutch Behçet’s patients to elucidate variability of prevalence and morbidity amongst different ethnic groups and changing figures upon migration.

All patients included in our study fulfilled the diagnosis of Behçet’s disease by the criteria of the International Study Group for Behçet’s disease.2 For prevalence analyses, the numbers of Behçet’s patients were collected from the hospital records of four hospitals in the Rotterdam area (Erasmus University Medical Center (Erasmus MC), Vlietland Hospital, Maasstad Hospital, Sint Franciscus Gasthuis). Only Dutch, Turkish and Moroccan ethnicities were included in this analysis since the occurrence of Behçet’s disease in other ethnic backgrounds in the Netherlands is known to be too low to reach significant power. Public information on populations and ethnicities of inhabitants of the Rotterdam postal area is freely accessible from the governmental institute for statistical data (Centraal Bureau voor de Statistiek).
The morbidity analyses were performed by reviewing files on the presence of disease symptoms from all Behçet’s patients visiting Erasmus MC (also from outside the Rotterdam postal area) up to January 2012. To compare our data with other cohorts, we performed a PubMed survey on epidemiological data and Behçet’s disease. Statistical analyses were performed with SPSS 17.0 version (Chicago Illinois). The chi-square test method was used, a p-value < 0.05 was considered to be statistically significant.

Disease features
The Erasmus MC cohort of 110 Behçet’s disease patients comprised three subpopulations: Dutch-Caucasian, Turkish and Moroccan patients. The remainder constituted a mix of various ethnicities. Patient characteristics are presented in table 2a. The average age of the patients was 44 years (table 2a). The male-female ratio was 1 for the entire group; 0.64 for the Dutch patients, 1.31 for the Turkish, and 1.66 for the Moroccan patients, respectively. Oral and genital ulcers and skin involvement were most prevalent. No significant differences were observed between the ethnic groups in any of the symptoms of the diagnostic criteria (table 3).
Other clinical symptoms were again split up per ethnicity (table 2b). Fatigue, headache and arthralgia were often present. Of all the symptoms, significant differences between the ethnic cohorts were only demonstrated for the prevalence of arthritis and arthralgia between Dutch and Moroccan patients (p < 0.038) and arthralgia between Dutch and Turkish patients (p < 0.04); an increased incidence in Turkish and Moroccan patients was seen (table 3). There was no significant difference between the occurrence of anterior uveitis when comparing Dutch patients with either Moroccan or Turkish patients (p = 0.50 and p = 0.36 respectively). In both the Moroccan and the Turkish groups, uveitis was also present in patients who were born in the Netherlands (second-generation migrants). There was no significant difference between morbidity in male and female patients (data not shown). 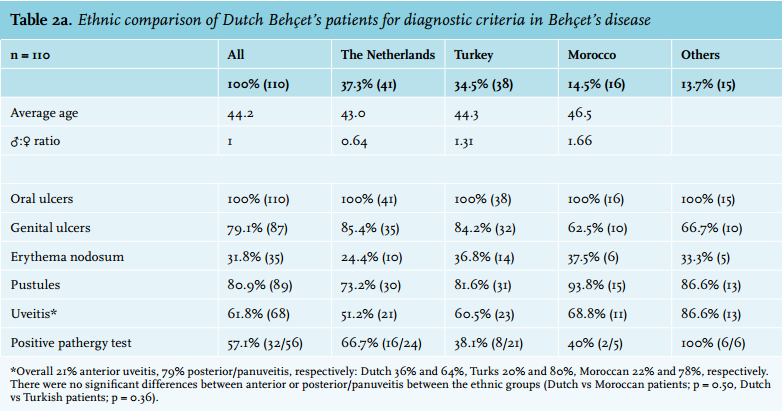 Comparison with other cohorts
We compared our data with Turkish, Moroccan, German and British cohorts (table 4a and 4b).23,24,26,27 The German cohort consisted of two main ethnicities: German (38.5%) and Turkish (45.3%). For the empty cells in the table no data were available in the original articles. The male-female ratio was 0.5 in the UK cohort and 1 or higher in the other cohorts. Oral and genital ulcers and skin involvement were most prevalent. In contradiction to observations in our own cohort, disease manifestations differed between the different populations (table 4a and table 5). Pustules appeared to be more prevalent in the Erasmus MC cohort as compared with Germany and Morocco. Uveitis was more prevalent in Western as compared with Turkish and Moroccan cohorts. Furthermore, major vessel involvement was less prevalent in the Erasmus MC cohort as compared with the UK and Moroccan cohort.
In the other cohorts, data on other disease features related to Behçet’s disease were limited (table 4b). We did find a significant difference between prevalence of arthralgia (common in the UK), arthritis and neurological involvement (table 5).

We present the first epidemiological and morbidity data of Behçet’s patients living in the Netherlands. In this population the majority of patients are Dutch-Caucasian, Turkish or Moroccan. The prevalence of Behçet’s disease in the Rotterdam area amongst these groups reflects epidemiological studies in comparable populations and does not appear to shift after migration.
Comparable data from Germany showed that the prevalence of Behçet’s disease in the Turkish population was similar to our findings, and equals the reported prevalence in the European part of Turkey.22 Thus, our observation of next-generation immigrants with Behçet’s disease and the fact that the disease can also develop in non-Turkish (or Asian) patients contradicts with the suggestion that it does not develop after migration. This suggestion of causative land-based disease was based on the observation that Behçet’s disease did not occur in Japanese immigrants on Hawaii25 and on the presence of a decreasing prevalence of Behçet’s disease after migration from Turkey to Germany.20 However, the latter could not be confirmed in a second study by the same group in 2012.22 Unfortunately, our cohort was too small to perform sub-analyses of prevalences of Turkish and Moroccan patients who were born in the Netherlands and those born in Turkey and Morocco. Also other prevalence studies fail to present this data. However, in one study about the age of immigration and the risk of developing Behçet’s disease, no correlation was found.28
We would like to stress that the pathogenesis of Behçet’s disease does not appear to be decisively determined by the country of residence. Whether the disease severity is influenced could not be studied, since there is no validated severity scoring system for Behçet’s disease.
The average age of the Behçet’s patients in the Erasmus MC cohort was similar amongst the various ethnicities.17,29 The Dutch-Caucasian male-female ratio tended to be lower as compared with Moroccans and Turks. Apparently a female prevalence occurs in Western and Asian countries as observed in other cohorts (table 2a).24,27 Saylan et al. reported female predominance in the United States, the United Kingdom, Korea, and China, whereas a male predominance was found for almost all Middle Eastern countries.30 A low male/ female ratio is often seen in autoimmune diseases. However, Behçet’s disease is generally not associated with autoimmunity, rather with autoinflammation.31 The latter is not associated with female predominance, leading to uncertainty about the significance of the mentioned observations.32
Prevalence of many symptoms was significantly different in our cohort as compared with other cohorts; differences in data collection can be of influence. The only clinically relevant differences in morbidity were skin lesions and uveitis. In Dutch patients a significantly higher percentage of pustules was seen as compared with Germany and Morocco. Prevalence of erythema nodosum was also statistically significantly higher in the Erasmus MC cohort and in the German study, as compared with Moroccan figures. It is widely thought that environmental components are essential in the pathophysiology of Behçet’s patients. Therefore it was expected that skin involvement would have been higher in countries with high disease prevalence. Other factors, such as genetic susceptibility, could account for our observation.
A significantly higher prevalence of uveitis was seen in Western cohorts compared with Turkish and Moroccan populations. Since Behçet’s disease is rare in the Netherlands, it is possible that a general physician could miss the diagnosis in a Dutch-Caucasian patient who presents with oral ulcers.29 One could argue that a relative underdiagnosis of the less severe cases of Behçet’s disease might lead to relatively higher prevalence of severe cases with uveitis. To determine whether severity in ophthalmic symptoms might be related to ethnic origin, we compared the less severe anterior uveitis with the more severe presentation (panuveitis and/or posterior uveitis) in the various ethnic groups. In these cohorts we could not demonstrate such a relation. Moreover, the occurrence of other severe symptoms, such as major vessel involvement, did not differ between the groups either. There are no other data available in epidemiological studies that present details of ocular involvement, or disease severity. A mainly Caucasian cohort of Behçet’s patients in the US reports 11% anterior uveitis in a group of 168 of patients with ocular involvement.33 A second additional reason for the high percentage of uveitis found in the Erasmus MC cohort is the close cooperation between our hospital and the Rotterdam Eye Hospital in respect of referral of patients. In conclusion, the prevalence of Behçet’s disease in different ethnic groups in the Rotterdam area is similar to that in the countries of origin of these patients. It does not appear to shift after migration. However, a substantial additional amount of patient data is necessary to elucidate migration effects on the occurrence and morbidity of Behçet’s disease more robustly. This warrants international cooperation between treating physicians. 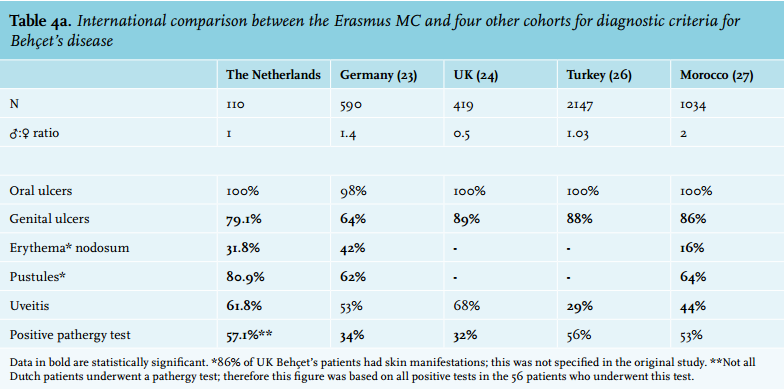 None of the authors have a financial or non-financial competing interest that could influence interpretation or presentation of any of the data.