Study design
We conducted a prospective observational cohort study in medical and surgical patients at the Erasmus MC Rotterdam (a large university hospital) from March until August 2014. We did not interfere in nadroparin prescription, and included only patients in whom nadroparin was started by the treating physician. For every new prescription of once daily subcutaneous nadroparin 5700 IU (Fraxiparine®, GlaxoSmithKline, Zeist, the Netherlands) an alert was sent automatically to the research team by the electronic prescription system, after which the patient was screened for eligibility. The study was approved by the medical ethics committee and all patients gave written informed consent.

Patients
Eligible patients were 18 years or older with a recent creatinine measurement (not older than one month without an indication that it could have changed due to onset of new medical conditions) and a glomerular filtration rate (GFR) above 10 ml/min/1.73 m2. A further requirement was the expectation that they would be on nadroparin 5700 IU for at least five days during hospitalisation. Furthermore, patients were not eligible if they had severe liver failure, were pregnant, had used LMWH prior to inclusion and if nadroparin was started in the intensive care unit (ICU). Enrolled patients were excluded if they left the hospital or if the nadroparin 5700 IU dose was stopped or changed.

Nadroparin administration and measurement of peak anti-Xa activity
Nadroparin was administered subcutaneously every day at the same time. To study peak anti-Xa activity, blood samples were taken four hours after nadroparin injection. Samples were taken on day 1, 3, 5 and if possible on day 10. Times of administration and blood sampling were registered by the nurse. If a blood sample could not be taken on these days for logistic reasons, blood sampling was performed the next day, four hours post injection. Blood samples were obtained in a 3.2% sodium citrate anticoagulated tube and sent immediately to the hospital haemostasis laboratory. Anti-Xa activity was measured by using a validated chromogenic assay (Sysmex CS-5100) and was expressed in international units per millilitre (IU/ml). The minimum anti-Xa activity that could be measured was 0.10 IU/ml. 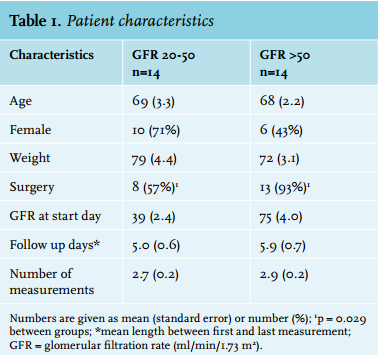 Patient characteristics
We included 36 patients in the study. Eight were excluded from statistical analyses because they had less than two peak anti-Xa measurements which restricted the analysis to 28 patients. No patients with GFR 10-20 ml/ min/1.73 m2 were included and only two with GFR 20-30 ml/min/1.73 m2. The group of GFR 30-40 ml/ min/1.73 m2 consisted of five patients and the group of GFR 40-50 ml/min/1.73 m2 of 7 patients. We pooled the data into two groups for analysis: normal renal function (GFR > 50 ml/min/1.73 m2 ) and moderate renal insufficiency (GFR 20-50 ml/min/1.73 m2 ) (figure 1).
Table 1 shows the baseline characteristics. While GFR was stable in the group with normal renal function, it was more variable in the group with moderate renal insufficiency: In four patients, GFR improved to > 50 ml/min/1.73 m2 during follow-up (on day 3, 4 or 5), while in one patient the GFR did improve but remained below 50 ml/min/1.73 m2. GFR decreased in one patient, and only one measurement was available in four patients. 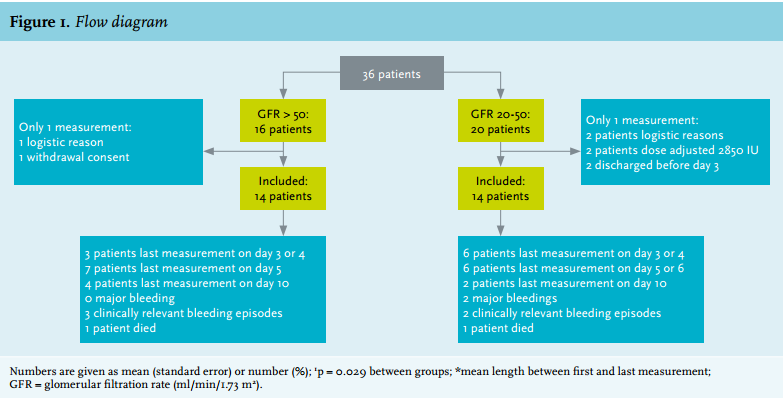 Secondary outcomes: bleeding complications and death
During the study, seven patients developed bleeding complications, of which four were in the group with impaired renal function (more details in figure 1). In both groups, one patient died due to other reasons than bleeding or VTE. Although our sample size is not large enough to find significant differences, there were no correlations between clinical outcomes and renal function or peak anti-Xa activity. For instance, one major bleed was detected on day 6 while peak anti-Xa activity on day 4 was 0.13 IU/ ml and the patient was switched to 2850 IU on day 5 due to a further decrease of GFR. In the other patient with major bleeding, severe liver failure including low levels of coagulation factors (including factor V) likely attributed to bleeding, since peak anti-Xa activity was normal on day 3 and nadroparin was terminated in advance of the bleeding.

We found no accumulation of a prophylactic dosage of 5700 IU nadroparin in patients with moderate renal insufficiency with a GFR between 30-50 ml/min/1.73 m2 during a mean follow-up of five days. Peak anti-Xa activity appeared to be lower on day 5 than on day 1 in a large number of patients, especially in patients who underwent surgery. Although the correlation between anti-Xa activity and clinical outcomes is not unambiguous, it is the best available test to measure LMWH activity, and we therefore conclude that a high prophylactic dosage of nadroparin is safe in patients with GFR 30-50 ml/min/m2 . 1,30-34 Due to underrepresentation of patients with a GFR < 30 ml/ min/1.73 m2 we cannot give a conclusion for this group.
Our results are in accordance with a small earlier multiple-dose study.35 This study in six patients with nephrotic syndrome with a GFR above 30 ml/min did not find nadroparin accumulation. An earlier single-dose study did find a prolonged half-life and a higher area under the curve in renally impaired patients compared with healthy participants, but no significant differences in peak anti-Xa activity.25 Although a prolonged half-life after a single dose does not necessarily lead to clinically significant accumulation, this single-dose study seems to be the basis for the currently recommended prophylactic dose reductions in patients with a GFR below 50 ml/min.6,8,25,26,36,37
It is surprising that in a large number of patients peak anti-Xa activity decreased after repetitive administrations (figure 2), which seemed to correlate with undergoing surgery (p = 0.023). We confirmed administration of nadroparin on all days including the day of surgery. Earlier studies that reported a decrease of peak anti-Xa activity mainly included patients on the ICU and decrease of peak anti-Xa activity could be explained by ICU-related factors such as multi-organ failure and vasopressin use.38-42 We cannot explain the observed changes in anti-Xa activity. This finding does not affect our conclusion, because significantly more patients in the group with normal renal function underwent surgery. This might be due to the fact that in patients with normal renal function surgery will more often be the reason for hospitalisation while patients with renal insufficiency had more comorbidity leading to hospitalisation for other reasons.
We found that peak anti-Xa activity showed a high interindividual variability, while the intraindividual variability was low in each patient. The high interindividual variability suggests there are other patient factors besides renal function that influence LMWH pharmacokinetics. This was also reported by other authors, except for tinzaparin.20,22,25,26,36,37,43 We found a significant correlation between anti-Xa activity measurements and body weight. For instance, for the first measurement the Pearson correlation coefficient was -0.439 (p = 0.019). There was no significant correlation between age and anti-Xa activity. Therefore, the high interindividual anti-Xa variability could be partly explained by body weight, probably due to differences in volume of distribution. These findings did not influence our results, since ratios based on measurements within the same patient were used for analyses (figure 2).
The strength of this study is that we used several consecutive days of dosing and multiple peak anti-Xa activity measurements in each patient, enabling us to objectively observe nadroparin accumulation. Second, we classified the patients in groups with GFR below and above 50 ml/min/1.73 m2 , because it has become common practice to consider nadroparin dose reduction in GFR < 50 ml/min. Therefore our conclusion is directly applicable.6,8,25,26
The observational study design caused some limitations, including changes in renal function while patients were already included in the study. We decided to classify groups based on GFR at inclusion. Of the four patients with renal insufficiency at baseline in whom peak anti-Xa activity increased on the last day, two patients had a GFR that had increased > 50 ml/min/1.73 m2. Since this study aimed to define whether dose adjustment is necessary, we think this observation further supports the findings that it is not necessary to adjust the starting dosage of prophylactic nadroparin.
A second possible limitation is that with 28 evaluable patients the sample size was small. However, the study was powered to detect significant differences if present and is comparable with other LMWH accumulation studies.24,25,35,37
Another limitation is that we were not able to include patients with a GFR < 20 ml/min/1.73 m2. This is probably due to pre-emptive dose adjustment in patients with severe renal insufficiency. This is a major limitation, since this is the group of most interest: if any accumulation occurs it will be in this group. Earlier studies showed both an increased bleeding risk and a more than twofold VTE risk in patients with severe renal insufficiency.45-51
In conclusion, in patients with moderate renal insufficiency no accumulation of high prophylactic dosages of nadroparin could be detected. Therefore no dose adjustment is necessary when GFR is 30-50 ml/min/1.73 m2.

This work was funded by the Dutch Kidney Foundation (Safety of medication in renal insufficiency, MV 13.36)