Thinking beyond the mass: ANCA-associated vasculitis mimicking a pancreatic malignancy 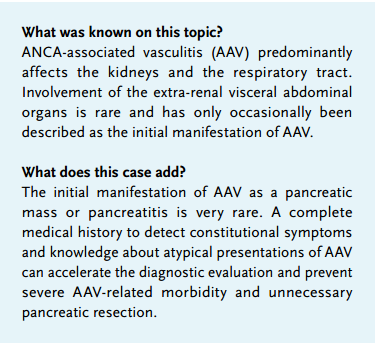 A 57-year-old man was referred to our hospital for pancreatic surgery, because of a pancreatic mass that was highly suspicious of malignancy. Four weeks before, he was admitted to another hospital with fatigue, severe weight loss and painless jaundice. Physical examination was normal, except for signs of jaundice. Laboratory results showed cholestatic jaundice and slightly elevated alanine and aspartate aminotransferases (92 and 58 U/l, respectively). The amylase level and renal function were normal. Endoscopic retrograde cholangiopancreatography showed a stenosis of the distal common bile duct. Endoscopic papillotomy was performed with placement of a biliary stent at the level of the stenosis. Cytological examination showed atypical cells but no malignant cells. An abdominal computed tomography scan (CT) revealed a 25 mm soft tissue mass at the medial site of the stent without distant metastases (figure 1a). After these diagnostic and therapeutic procedures the patient was discharged out of the hospital and referred for pancreatic surgery to our hospital.
At presentation in our hospital, two weeks later, the patient reported multiple episodes of epistaxis in the past two weeks and oliguria for two days. Physical examination showed nasal crustae, conjunctivitis of both eyes, tenderness in the epigastric region and pitting oedema of both ankles. Laboratory results showed normalisation of bilirubin and transaminases, but now severe renal failure (creatinine level 1031 µmol/l). Additional investigations revealed 1+ proteinuria and haematuria. ANCA was positive with a perinuclear pattern and specificity for myeloperoxidase (MPO-ANCA). Chest X-ray was normal and neither abdominal MRI nor endo-echography with cytological examination showed evidence of a pancreatic mass or malignancy. A renal biopsy showed a pauci-immune necrotising crescentic glomerulonephritis of > 50% of the glomeruli with negative immunofluorescence for IgG, IgA, IgM, fibrinogen, albumin, C3, kappa and lambda (The diagnosis ANCA-associated vasculitis (AAV) with pancreatic, nasal, conjunctival and renal involvement was established. The patient was treated with corticosteroids, oral cyclophosphamide and plasmapheresis. With this treatment, the conjunctivitis, epistaxis and fatigue resolved, but renal function did not recover. Abdominal MRI was repeated after four months of treatment and showed no signs of pancreatic cancer (figure 1b). Six months after starting haemodialysis the treatment was converted to peritoneal dialysis. ). Biopsy of the nasal crustae showed chronic and superficial ulcerative inflammation, without the specific characteristics of AAV, such as vasculitis, necrosis or granulomatosis.

AAV is a group of multisystem diseases, which are characterised by necrotising vasculitis. The ANCA-associated vasculitides include granulomatosis with polyangiitis, microscopic polyangiitis, Churg-Strauss syndrome and renal-limited vasculitis. AAV has an annual incidence of 12-20 per million with a higher prevalence in older adults (> 50 years) and Caucasians.3,4
AAV predominantly affects the kidneys and lungs with eye, ear, nose or throat involvement often present at diagnosis. The initial presentation of AAV with pancreatic involvement has been described in a few case reports (table 1).5-13 These reports show that pancreatic involvement can either manifest as acute pancreatitis or as a pancreatic mass.5-13 In patients who presented with acute pancreatitis, the diagnosis of AAV was only established when additional, more typical, symptoms of AAV such as renal involvement manifested.
In most patients who presented with a pancreatic mass, the diagnosis of AAV was established after surgery.7,12,13 Knowledge that a pancreatic mass can be a manifestation of AAV or (IgG4-related) autoimmune pancreatitis (AIP) can prevent unnecessary surgery. In addition, the presence of atypical symptoms and multi-organ involvement in patients presenting with a pancreatic mass should raise suspicion of other diagnoses than malignancy. Rapid recognition of AAV is important as early treatment of AAV results in a greater likelihood of complete or partial reversibility of the disease.14 Imaging characteristics of the pancreatic mass on CT scan and MRI scan can be helpful to differentiate between AAV or AIP and pancreatic cancer. Serological markers such as IgG4, ANCA and CA-19-9 are inconclusive.9,15 Imaging characteristics such as decreased enhancement in the pancreatic and hepatic phase on CT and a lesion with upstream dilatation of the main pancreatic duct with high diffusion coefficient on MRI are signs that make pancreatic cancer more likely.15
In our patient unnecessary surgery was prevented, but despite immediate immunosuppressive treatment the patient remained dialysis-dependent. This corresponds with the observation in other case reports that pancreatic involvement in patients with AAV seems to be related to a more rapid progressive course of disease, with even two fatal outcomes. 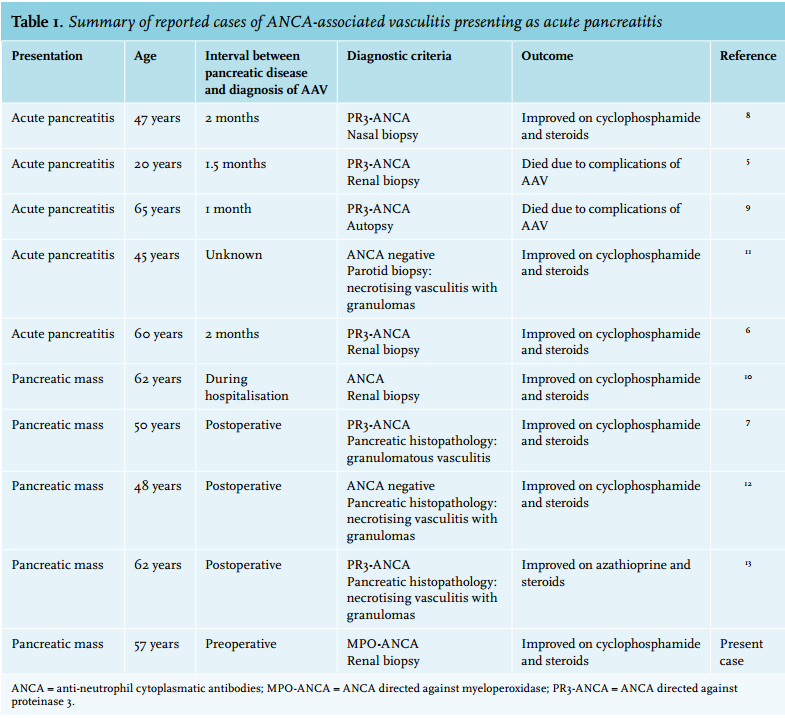 Our case demonstrates that a pancreatic mass can be a first presentation of AAV. Awareness that pancreatic manifestations may be part of AAV is important for the timely diagnosis and treatment of AAV. This may prevent severe morbidity and unnecessary surgery.