Answer to Photo Quiz: An elderly man with swelling and discolouration of the right earlobe

The pathology report showed a B-cell chronic lymphocytic leukaemia (B-CLL) with cutaneous involvement. No B-symptoms and no lymphadenopathy were present. Laboratory investigation of peripheral blood showed neither anaemia nor thrombocytopenia, but it did show a leukocytosis of 36.6 x 10*9 cells/l, with a differential count of 82% lymphocytes. The lactate dehydrogenase was not elevated and the soluble immunoglobulins G and M were decreased (IgG: 3.9 g/l; IgA: 1.5g/l; IgM: < 0.30g/l). Chest radiography and ultrasound of the abdomen showed an enlarged spleen (15 cm) but no other localisations of the lymphoma, which depicts a RAI stage II. The immunophenotype of the peripheral blood showed a monoclonal B-cell population IgM/IgD lambda (84%) and these B-cells were CD5+CD19+CD20+CD23+CD38+FMC7-, consistent with a B-CLL. Immunohistochemistry of the biopsy showed CD20 positive atypical lymphocytes with no relation with the epidermis (table 1 and figure 2).
There was no indication for treatment based on the International Workshop on CLL/ National Cancer Institute working group (IWCLL/NCI) criteria.1 Because the earlobe was progressively swelling, however, the choice was made to start systemic therapy with chlorambucil 4 mg once daily for two weeks. As the earlobe did not respond to this treatment, the dose of chlorambucil was subsequently increased to 10 mg once daily for intervals of two weeks every month for four months. The leukaemia of the earlobe appeared refractory to this treatment, nevertheless the lymphocytosis decreased. Consequently the earlobe was irradiated, first with 4.0 Gy, with partial effect, and later with six doses of 2.5 Gy, with complete remission (figure 1b). Since then his clinical stage is a Binet stadium A and has been stable without any further treatment for the last seven years.

Cutaneous involvement of a B-CLL has not been widely described. There is one article describing 42 patients with cutaneous involvement of a B-CLL,2 in which duration of B-CLL before skin manifestations varied from zero to 142 months and in our patient this was approximately 48 months. In seven of the 42 patients the cutaneous lesion was the first sign of the disease. The lesions were confined to the head, neck, trunk or extremities and no earlobe lesions were described. In another article, histological variables that independently correlated with relatively short survival included an infiltrate of severe intensity, a diffuse pattern, epidermal changes (especially acanthosis and ulceration), medium-sized and large B-lymphocyte (more than 5%), and reactive cells within the infiltrate (neutrophils, eosinophils, and plasma cells).3 None of these criteria applied to our patient; although there is infiltration with reactive T-cells. The patients in the group with no histological variables that correlated with shorter survival had an estimated five-year survival of 66.6%. 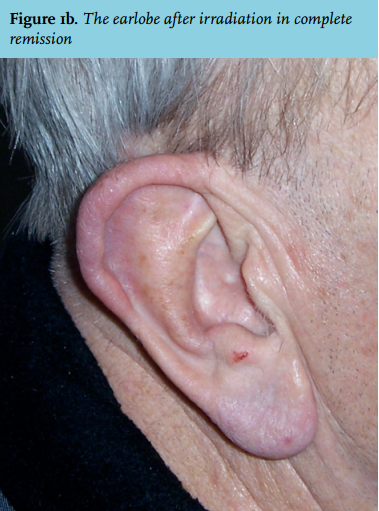