Gamma-butyrolactone (GBL) (figure 1), a prodrug of gamma hydroxybutyrate (GHB), is increasingly being used as a recreational drug as it is cheap, easily available and has relaxant and sexual effects. However, it is a highly addictive drug and understanding toxicity is essential for the management of intoxicated patients. We report a patient with chronic GBL abuse who presented with a high anion gap metabolic acidosis and acute lung injury (ALI), a clinical syndrome that has not been described before. We will discuss the diagnostic process and possible pathophysiological mechanisms that may have led to this life-threatening condition. 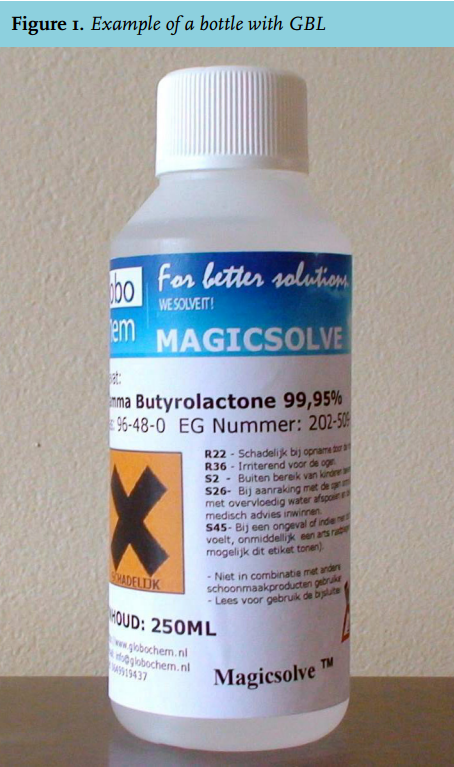 A 44-year-old woman with a borderline personality disorder presented to the emergency department with progressive dyspnoea for three days. She had no other relevant medical history. She reported no recent cold, fever, cardiac symptoms nor use of alcohol or illicit drugs. Her medication included benzodiazepines and 10 mg of oxycontin™. She denied nausea or vomiting and there were no signs of aspiration. On examination, she appeared agitated. Her blood pressure was 130/80 mmHg, pulse rate 130/min and temperature 36.6°C. The respiratory rate was 32 breaths/min and the oxygen saturation was 89% on ambient air. The Glasgow-Coma score was 15 and she had normal pupils. Laboratory parameters showed leucocytosis (23.8 x 109/l), an elevated C-reactive protein, (176 mg/l), and a high anion gap metabolic acidosis (pH 7.29; pCO2 4.7 kPa; HCO3 17 mmol/l; pO2 7.5 kPa; sodium 142 mmol/l, chloride 106 mmol/l, anion gap 19). Lactate was 1.0 mmol/l and urine screening only showed a trace of acetone. A chest X-ray showed bilateral alveolar consolidations (figure 2a). She was admitted to hospital and treatment with benzylpenicillin and ciprofloxacin was started as community acquired pneumonia was considered. To further investigate the high anion gap metabolic acidosis, we reinforced the patient to evaluate whether she might have taken any drugs.
Subsequently, she confessed smoking cannabis a couple of times a week and ingesting GBL every two hours in the last 3 months. Per ingestion she mixed 2 ml of GBL with water. Toxicological analysis of the urine was performed which showed traces of benzodiazepines and a positive screening for cannabis and opioids; screening for cocaine, methadone and XTC was negative. To further evaluate the abnormalities seen on the chest X-ray, computed tomography of the thorax revealed bilateral extensive ground-glass opacities (figure 2b). The differential diagnosis consisted of Pneumocystis pneumonitis due to HIV-infection, viral pneumonitis, aspiration pneumonia or a chemical pneumonitis due to substance abuse. She tested negative for HIV. A bronchoalveolar lavage was performed to rule out infectious causes. Adenovirus, respiratory syncytial virus, influenza A and B virus, and parainfluenza virus 1, 2 and 3 tested negative, staining for Pneumocystis jirovecii was negative as was auramine staining; and (myco) bacterial cultures did not reveal respiratory pathogens.

Pathological examination of the bronchoalveolar lavage showed acute inflammation with neutrophils; no malignant cells were seen. Repeated serology for Chlamydia pneumoniae, Chlamydophila psittaci, and Mycoplasma pneumonia was negative. Blood cultures remained negative. By exclusion of infectious causes of pneumonia our differential diagnosis was chemical pneumonitis or immune-mediated pneumonia caused by GBL/GHB. Because of respiratory failure she required mechanical ventilation. With the hypothesis of ALI due to GBL, treatment with high-dose prednisolone was started. Subsequently, she recovered and mechanical ventilation was discontinued after three days. She needed high doses of midazolam (up to 25 mg/ hour) to suppress her withdrawal symptoms. The serum level of GHB was 440 mg/l (reference < 10 mg/l). With a molecular weight of gamma hydroxybutyrate of 103 this concentration of GHB contributes 4.2 mmol/l of anions, explaining the high anion gap. Eventually, she was discharged from hospital nine days after admission. A chest CT scan performed four weeks after discharge showed normalised lung parenchyma. 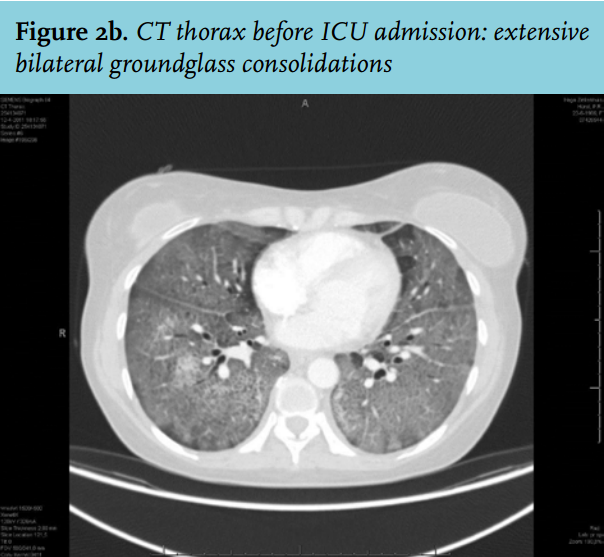 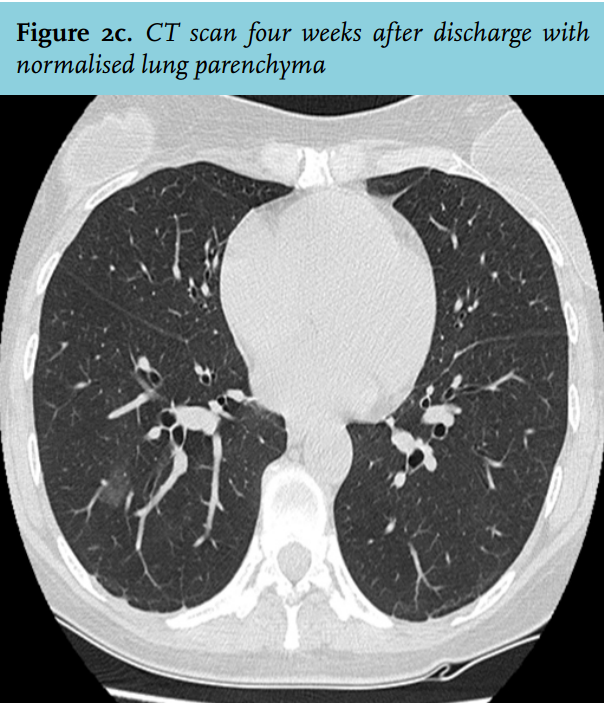 We present a 44-year-old woman with agitation, a high anion gap metabolic acidosis, GBL abuse and progressive respiratory insufficiency that most likely represented a form of ALI or ARDS. Infectious causes were excluded and aspiration pneumonia was believed to be unlikely based on the presentation and subsequent course. GBL is a precursor of GHB. It is a hygroscopic solvent which is used as stain remover and paint stripper. It is increasingly being used as a recreational drug.1 Unlike GHB, GBL is still legal in the Netherlands. It can easily be obtained via internet. GBL is converted into GHB by mixing it with sodium hydroxide, but once ingested it is also rapidly metabolised into GHB. GHB itself rapidly dissociates to the anion and a hydrogen ion and thus high GHB levels will lead to a high anion gap metabolic acidosis.2

GHB works as an agonist on the GABAb receptor and the GHB receptor. Initially, dopamine release is inhibited (causing sedation) and paradoxically dopamine release is increased later on (leading to agitation). Recently, it became evident that GHB also has high-affinity for the GABAa receptor in the central nervous system but whether the effect is agonistic or antagonistic remains elusive.3 It is believed that binding to the GABAa receptor might have paradoxical effects. This is of interest as recent experimental studies demonstrated a role of the GABAa receptor in the pathogenesis of ALI by its involvement in alveolar-fluid homeostasis.4,5 In this respect, blocking of the GABAa receptors in the lung is associated withalveolar inflammation and pulmonary oedema. We thus hypothesise that our patient might have developed ALI due to a systemic toxic effect of GHB on alveoli by binding on the GABAa receptor. The hygroscopic nature of GBL might have contributed as small amounts of GBL will be inhaled during ingestion. As our patient ingested GBL very frequently over a long period of time, unintended GBL inhalation might have led to a direct toxic effect on the alveoli.

To our knowledge, this is the first case of ALI after GBL ingestion. A few possible cases have been described previously because pulmonary oedema was a key feature on post-mortem findings.6,7 These findings support our hypothesis.
In summary, this case alerts clinicians that the combination of an unexplained high anion gap metabolic acidosis and diffuse alveolar infiltrates should prompt a diagnosis of intoxication. In this respect, GHB/GBL intoxication should strongly be considered, especially as it has been one of the increasing causes of lethal poisoning in past years.8

The authors declare no conflicts of interest. No funding or financial support was received. Written informed consent was obtained.